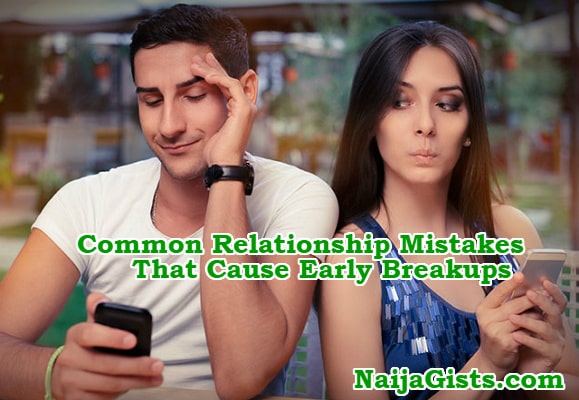 Sometimes, when sex enters a relationship early, it can hijack your emotions and cloud your judgment.

After months or years of dating, you finally found a guy or lady worth keeping around for awhile. While the early part of a new relationship is fun and exciting, those first few weeks will also help determine whether the relationship moves forward or not.

Unfortunately, men and women get carried away by their feelings without paying attention to what goes on during the honeymoon phase.

Some men and women tell Effects the most common mistakes they made early in their relationships.

Chinenye: I thought I could change him
He would shout at me in public. He would insult me almost all the time and I took it all. He was used to showing up late, being glued to his phone when we are together.

I didn’t speak up early and his bad behaviour continued until I couldn’t take them anymore. I thought I could change him but I was mistaken. He went from bad to worse and I couldn’t cope anymore. I broke up with him.

Kayode: She was just after my money, she didn’t love me
From my experience, I would say that the early stages of a relationship usually seem so promising and even if you feel deeply comfortable, your emotions may be more real than that of your love interest. I have learnt to share with my partner as much as they share with me and only if it feels right.

The last girl I dated took my feelings for granted. I revealed my emotions too soon and she broke my heart. She was just after my money but was telling me she loved me because I always tell her that I do.

You start dating someone and begin a relationship that’s also sexual, but if you are not really connected beyond the sex, it can complicate the relationship too soon. I noticed afterwards that the only thing that held us together was just sex. We had almost nothing concrete in common and I felt bad.

Adeolu: Calling her constantly was my greatest mistake
Texting all day long is the new normal. And when you love someone, of course, you want to talk and hear from them all the time. It can also be a huge turnoff while dating because it is smothering and shows neediness and lack of self-control.

I kept calling my ex girlfriend and she became afraid of me. I should have maintained a bit of mystery. She told me I was a player for blowing up her phone with calls and messages. I felt bad because I really loved her. But I had to let her go. I couldn’t force her to be with me.

Gloria: I got nosy about his money
Recently, I was dating this hardworking, handsome and good guy but I messed it up by paying too much attention to how much money he makes.

It would have been okay if I was only interested in what he did for a living and how he liked his business. I was carried away by the money and went beyond that. I kept asking him for money too and he slowly backed out of our relationship.

He felt I was asking too much questions about how much money he had. He asked me one day out the blues why I was digging for his financial information. He said it looked like I just wanted his money. He said that he thought I was different from other girls but it turns out I was a gold digger.

Bukola: I fell in love too fast with a player
One week after meeting my ex boyfriend, I told myself that he is the one I would spend the rest of my life with. The sad thing was that he wasn’t in a hurry to commit to our relationship. There was chemistry and a connection, but he only saw me as a short-term fling.

I later discovered he was a player who didn’t know how to love. He just loves to trick women into his bed. I fell too fast without making sure that he viewed the relationship with the same level of seriousness as I did.

Ifunanya: Faking interest in his hobbies destroyed our relationship
I was told that if you love a man, you must love his hobbies. I took that advice into my relationship and it ruined it. I have learnt from that experience that if you pretend about your lover’s hobbies, you are deceiving not only yourself but your partner.

Be politely honest about the things you enjoy. It must not be the same thing he likes doing. Being interested in different things keeps relationships interesting. I won’t make this mistake again.

Nelson: I got too clingy and she left
I became smothering quickly in the beginning of my relationship with a girl I met recently and it backfired. It made her leave me. She became scared of me. She accused me of being obsessed with her and said it was unhealthy. She needed space and I failed to give her privacy without me.

Esther: I ignored glaring red flags
It’s tempting to overlook less-than-ideal personality traits in the beginning of a relationship, either because you are smitten, or because you really want things to work out or both. I made a big mistake in my life. I overlooked his constant lying, name-calling, aggression, jealousy and subtle abuses.

I overlooked all these things and married a man who doesn’t value me. I am stuck with him because I don’t believe in divorce. I am dying silently but I don’t know what to do. I ignored the red flags and ended up in a toxic marriage.

Vera: Badmouthing my exes was a bad move
It doesn’t matter how much you hated your ex—nobody wants to hear you go on and on about the last person you were with. I didn’t realize this on time. I kept going on and on about my exes, badmouthing them before my new love interest and he started withdrawing from me. He later broke up with me because he couldn’t handle the venom that accompanied the way I talked about my exes.

Thomas: I tried too hard to impress her
I lost a relationship because I tried too hard to impress her. I wore clothes I was uncomfortable in. I spent money on unnecessary things. I made her fall for someone who isn’t the real me. I shouldn’t have tried to be the person I thought she wanted me to be. I should have been confident with what I brought to the relationship. I should have known that being authentic is the best bet for building a solid foundation.

Sandra: Stalking him on social media was a bad idea
Liking and commenting on all his social media posts was my mistake. It was like I was stalking his every move and going back years to see who he was dating. He later told me I was creepy and needy.

I should have given him some space online because he called me insecure. We continued our relationship for a while but had to part ways because he said I was choking him by inserting myself into his online world.