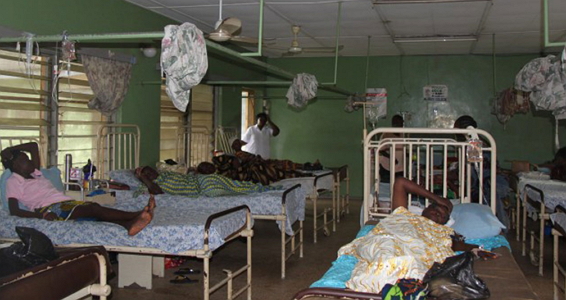 By Duku Joel, The Nation

The death toll in the Borno Cholera outbreak has risen from fourteen to eighteen between 5th and 7th September, 2018.

According to a document emailed to journalists by Abiodun Banire, National Public Information Officer I UN Office for the Coordination of Humanitarian Affairs (OCHA) also stated that the number of cases have gone up from 380 to 680 spreading to eight local government areas of the state within the period mentioned.

The statement informed that that the fatality rate of the outbreak so far is 2.6 per cent.

Cholera outbreak was declared in Borno State, north-east Nigeria, on 5 September 2018 by the state Ministry of Health.

The statement requested for additional resource mobilization to match the speed of the outbreak in other places.

“Additional resources are urgently needed to strengthen the response for timely containment of the outbreak. Health partners are currently using existing resources from regular emergency operations which are not enough for a full scale response and in case of a spread of the outbreak to other areas,” the statement explained.

The State Ministry of Health, with the support of humanitarian partners, is coordinating the response through the Emergency Operation Centre (EOC). Coordination meetings are currently held twice a week at the EOC, and daily at LGA level.

A 100-bed Cholera Treatment Centre (CTC) is operational in Dala (a locality in MMC), and in Magumeri LGA a Cholera Treatment Unit (CTU) has been set up in an existing health facility. Oral Rehydration Points (ORPs) have also been set up in El-Miskin, Muna Garage and Customs House camps for internally displaced people. Additional ambulances are required in all affected LGAs to transport those seeking treatment.

Health organizations are carrying out risk communications, which include making regular and frequent visits to households to encourage individuals with cholera-like symptoms to be screened. By communicating at household level in this way, health partners have visited 1,163 households which resulted in the identification of 18 suspected cases of cholera.

The most effective prevention measures against cholera are basic hygiene practices, including the use of clean and safe water and proper sanitation. Hygiene promotion activities, including radio broadcasts in English, Hausa, Kanuri and Shuwa, is underway in the affected LGAs to sensitize people to the risk of cholera, teach them how to prevent and manage diarrhea at home, and educate them on the use of chloride tablets for household water treatment and safe water storage.

In terms of sanitation, humanitarian organisations are working to dislodge latrines and repair damaged latrines in the affected camps for internally displaced people where the risk of transmission can be high due to congested living conditions”.

Photos: Bus Passengers Kidnapped By Boko Haram Militants Regain Freedom As Army Kills 14 Terrorists
Leah Sharibu Family Attacked By Robbers…US Based Group Urges CAN To Reach Out To Them