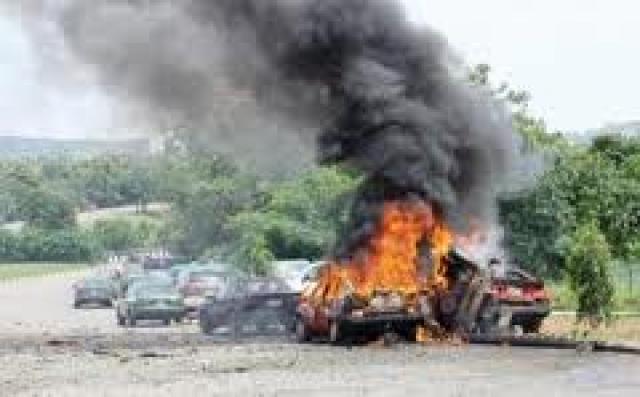 5 coordinated bombing carried out by Boko Haram in several area of Maiduguri have resulted in 58 death and 139 injuries.

The blasts immediately sparked confusion and a traffic gridlock in the city.

The first attack was carried out by a female suicide bomber at the Baga fish market at about 11:20 am, said Abubakar Gamandi, the head of the fisherman’s union in the metropolis.

“A female suicide bomber exploded as soon as she stepped out of a tricycle taxi,” said Gamandi, who was at the scene. “Eighteen people were killed.”

That account was supported by a nurse at the Maiduguri General Hospital, where many of the victims were taken.

An eye witness , Abdullahi Garba said: “a tricycle driver was trying to force his way into the market at top speed when the blast occurred from the tricycle.

“The spot was crowded at the time which explained why so many people died,” he said.

About an hour later another bomb blast hit the popular Monday Market, killing 15 people and close to the scene of the November 2014 blast which killed scores of people.

A vigilance group member, Salisu Yayaý, claimed to have counted five ambulances that evacuated victims from the scene.

It was not immediately clear whether the second attack was carried out by a suicide bomber.

“For now, we have at least 33 dead bodies from the two incidents…the toll may change because we are expecting more casualties,” said Gamandi.

The first two attacks were confirmed by Justice Commissioner Kaka Shehu, but he declined to provide casualties figures until rescue workers had completed their searches.

“We condemn these acts in their entirety and we extend our condolences to the victims,” .

“The terrorists are angry with the way they were sacked from towns and villages and are now venting their anger,” Shehu said.

The Commissioner of Police Clement Adoda confirmed the number of deaths to be 58 while 139 were injured.

Shehu was referring to an ongoing offensive against Boko Haram in Borno state being waged by Nigeria and Chad, with support from Cameroon and Niger.

“So far 50 dead bodies have been received here from the three blasts and 36 injured persons are receiving treatment at our Accident and Emergency unit,” he said.

But another source at the mortuary said 47 bodies were brought to the morgue, and more than 60 were injured. He lamented that the number of the injured and dead victims was a massive challenge for the hospital.

“Our facilities are overwhelmed; we couldn’t take all the injured persons. Some of them have been taken to the University Teaching Hospital and others to Umaru Shehu Hospital and other private hospitals as the situation permits,” the source said.

The four-nation offensive against Boko Haram has claimed major successes over the insurgents since the start of last month, and analysts have said that Boko Haram would likely step up bombings on civilian targets in response.

The sect has increased suicide bombings and village attacks recently as forces from Nigeria and Chad have driven the insurgents from a score of towns along Nigeria’s border with Cameroon.

Its members have attacked villages in Cameroon and Niger as Nigeria’s neighbors are forming a multinational force to confront the spreading uprising.

Boko Haram fighters are massing at their headquarters in the northeastern town of Gwoza, in apparent preparation for a showdown with multinational forces, according to witnesses who escaped from the town.

An intelligence officer said they were aware of the movement but that the military is acting with care as many civilians still are trapped in the town and Boko Haram is laying land mines around it. Consequent upon yesterday’s bomb blasts, Governor Kashim Shettima decided to cut short his political campaigns in the southern part of the state

He condemned the attacks as heinous.

The governor, through his media aide, Malam Isa Gusau, sympathized with the bereaved families and prayed for the repose of the souls of the dead.

He also prayed for the quick recovery of the injured and promised that government would foot their medical bills and provide every assistance necessary for the victims of both the dead and the injured.

Gusau said:”The Governor has, immediately after getting information about the incidence, directed the State Attorney General and Commissioner for Justice whose Ministry deals with citizens’ rights, to visit all affected areas and ensure speedy evacuation of victims to hospitals and mobilize medical doctors for emergency treatments that will be shouldered by the State Government. The, Governor directed that all necessary steps be taken to safe lives where possible no matter what is required.”

Gov. Shettima also regretted that the attacks happened when residents of the city were adjusting to normal life with the recent success stories over the fight against the insurgency.

“Governor Shettima was visibly troubled by the unfortunate bomb blast which came at a time citizens of Borno were already adjusting to normal lives following successes being recorded by the combined efforts of the military, other security agencies and youth volunteers called the civilian JTF involved in ongoing counter insurgency operations in different parts of the State.