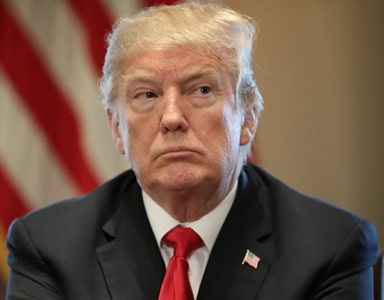 The President of the United States of America, Donald Trump’s net worth has dropped to $3.1 billion, but he has slid down a Forbes ranking of billionaires as the magazine believes his White House job is harming his brand.

The controversial president ranking dropped to number 259 on the list of Forbes’s wealthiest 400 billionaires released Wednesday, down from spot number 248 in 2017.

In 2015, the year that Trump announced his then improbable run for the presidency, Forbes valued his net worth at $4.5 billion.

Forbes attributes his declining wealth to deeper reporting about his assets, decline in brick-and-mortar retail, slowdown in real-estate, particularly in the luxury sector, and how being president affects the brand.

While he built much of his fortune on lending his name to projects he does not always own, a Forbes investigation say the strategy is backfiring, with his name no longer synonymous with luxury but divisiveness, driving away business partners and potential apartment buyers.

Nevertheless the value of property that he does own, including his Trump Tower penthouse, his personal private jet and Mar-a-Lago estate in Florida, dubbed the Winter White House, has gained in value, Forbes believes.

He refused multiple calls to divest fully, leading to ongoing accusations of conflict of interest.

Forbes calculated that if Trump had liquidated, paid capital gains tax on his fortune and created a blind trust to invest everything in the booming stock market, he would be would now be $500 million richer.

Amazon’s Jeff Bezos, whose fortune jumped $78.5 billion in one year, tops the Forbes list this year, with a net worth of $160 billion.

Microsoft co-founder Bill Gates, who held the number one spot for 24 consecutive years, is ranked number two at $97 billion.

Entrance to the exclusive club cost an all-time high of $2.1 billion and 204 Americans with 10-figure fortunes fell short.