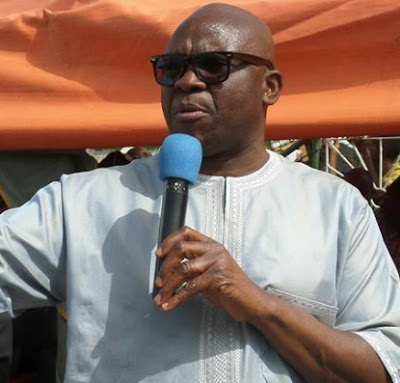 Ekiti State Man Of the People, Ayodele Fayose on Wednesday raised an alarm that the APC party is planning to impeach him before his tenure expires in October next year.

The governor complained to the Acting Chief Justice, Justice Walter Onnoghen, that the ruling party was planning to compromise a section of the Judiciary and muzzle democracy to oust him from office.

Fayose said the essence of the plot was to silence him as the voice of the opposition, following his “refusal” to defect to the APC.

Vowing to intensify his criticism of the Muhammadu Buhari administration, he said:

The governor told reporters in Lagos that APC chieftains were making subterranean moves to manipulate and compromise some judges to remove him through the back door.

He said this followed their failure to displace him through the ballot box, the election petitions tribunal, the Appeal and Supreme courts.

Fayose listed the arrowheads of the alleged plot as Oni and the Minister of Steel and Solid Minerals Kayode Fayemi.

He added: “The duo had boasted that ‘there is no going back on the latest plans to subvert the will of the people of Ekiti freely given, wrest the governance of Ekiti from me at all costs before the expiration of my tenure in October 2018 through orchestrated but dubious legal process. They will thereby render nugatory the sacred mandate given to me when I won in all the 16 local governments while the then incumbent Governor Kayode Fayemi recorded zero.”

Continue Reading
You may also like...
Related Topics:ayodele fayose, impeachment