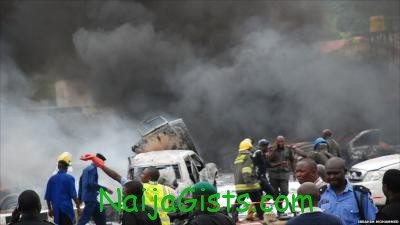 According to daily times, the office of the Independent National Electoral Commission (INEC) in Ikole Local Government Area of Ekiti State was on Monday Dec 12, 2011 bombed.

The incident occurred two days after INEC conducted a rerun election in Ekiti Central Federal Constituency II following a court order that invalidate the April election as one of the participating political parties name and logo was omitted.

Eyewitness said the assailants came in a red car and over powered the security man attached to the office located at Odooro Road and threatened to kill him before they detonated the explosive which completely burnt down the place.

The commission’s Public Relations Officer, Taiwo Gbadegesin confirmed the incident. He said the office was razed down with substance suspected to be explosives but no life was lost.

The Resident Electoral Commissioner of the state, Hussaini Pai also visited the place with other top dignitaries to assess the level of damage. naijagists.com

The state’s Police Public Relations Officer (PPRO) Mohammed Jimoh confirmed the explosion. He said bomb experts were already at the scene to ascertain what really happened.

The Oodua Peoples Congress (OPC) on Tuesday ruled out the possibility of the Boko Haram sect being involved in Monday’s bomb blast at the Independent National Electoral Commission (INEC) office in Ekiti.

“Nigeria should not put every episode of violence on the laps of the Boko Haram,” said Federick Faseun, the founder of the group. “I won’t subscribe to Boko Haram being responsible for the Ekiti bombing.”

He urged security agencies to unravel those behind the attack, warning that other groups might be taken advantage of the fact that all eyes on radical Islamic sect, Boko Haram, as being behind every terrorist attack in the country.

God save us in this nation o. Why bomb again !