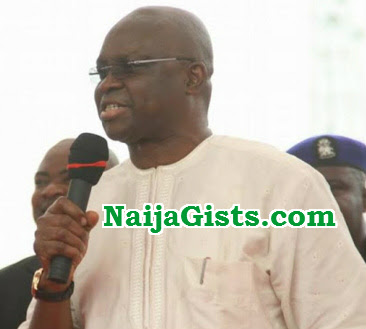 Ekiti Kete South-South/South-East Movement have condemned in the strongest terms, what the group described as the “reckless utterances of Governor Ayodele Fayose.”

A press statement by Kehinde Olatunji, the Publicity Secretary issued in Port Harcourt, the Rivers State capital on behalf the group said the “careless utterances and odd attitudes” of the governor are a disgrace to the people of Ekiti State, not only in Nigeria but also internationally.

The group further stated that the said utterances are barrier to the development of Ekiti State and thus, fall short of what is needed in the Ekiti State.
Ekiti Kete said the state lacks basic infrastructure and other development projects, yet the governor was busy saying irrelevant things.

The group commended President Muhammadu Buhari for appointing Senator Femi Ojudu as his Special Adviser on Political Matters, saying that he made the right pick.

The group described the Senator as a man of impeccable character, saying the people of Ekiti State deserve better than what they get now.

Ekiti Kete urged Senator Femi Ojudu to rise up and rescue Ekiti State from her present rot under the present government in power in the state.

Continue Reading
You may also like...
Related Topics:ekiti kete, fayose