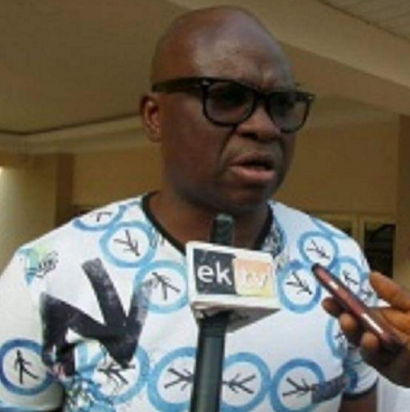 Worried youths from Ekiti state have described their state governor, Ayodele Fayose as a social disgrace to the common pride of the people of the state due to his unwholesome behavior.
The youths, under the aegis of Ekiti Kete Youth Forum, EKYF, said Ekiti State used to be known for academic and moral values, even before its creation and was endowed with professors of local and international reputes, youths with academic and moral backgrounds, but that it is disheartening and regretting that the state has lost its pride under Fayose.

EKYF, in a statement issued its Director of Publicity, Tope Idowu condemned Fayose’s idea of mocking the sensibility of Ekiti people, especially the less educated by taking the advantage of their status and celebrate poverty for them like Christmas instead of eradicating it, under the deceit of “Stomach infrastructure.”

“It is unheard of that Governor Fayose, instead of facing serious governance, has rather become common in the market as a seller of pepper, meat, fish, palm oil and so on. An act which has not only denigrated the highly esteemed office, but also deceitful as it aims at distracting the people from noticing his criminal tendencies towards serious governance.

“Since Fayose resumed office as the Governor of Ekiti on16 October, 2014, Ekiti has always been in the news for wrong reasons, due to series of shameful and uncultured acts being exhibited by Mr. Fayose on a daily basis, as he has also neglected his responsibility as a governor of a state and unofficially assumed the responsibility of the spokesperson of the opposition party (People’s Democratic Party) in the country.

“We are not unaware of what can least be called the highest level of irresponsibility on the part of the Governor, the idea of importing Sex Workers from Canada, South Africa and Ghana everyday for all night-party in the government house and these girls path everyday with thousands of U.S dollars, while the workers go home every month without being paid their due entitlements,” the statement said.

“We also lament the high level of unemployment of youths in Ekiti State, as it is most unfortunate that Mr. Fayose has not created any meaningful job opportunity for youths in the state since he became the Governor. Rather, he derives pleasure engaging them in immoralities and mobilize them as praise singers and social media propagandists by giving them peanuts, thus subjecting them to financial slavery and moral relegation, while his sons are flexing exotic cars which they bought with the commonwealth of Ekiti people,” it stated.

The youths also condemned the inability of Fayose to meet up with his obligations as the governor by paying the arrears and the salaries of the workers, even after getting bailout from the federal government.

They said the fact that Ekiti State is only a civil service, and that the civil servants were not being duly paid and businesses not moving, “yet Mr. Governor is less concerned about their welfare, this has informed our strongly condemning his idea of imposing heavy tax on the governed even with their small scale businesses, the tipper drivers and meat sellers who are struggling to feed their families.

The group also said the recent act of insubordination exhibited by the Governor in the House of Assembly while presenting the 2016 budget, calls for serious condemning, as it was a clear mockery of the legislature, which is a reflection of his lack of regard and respect for the legislative arm since he resumed office in 2014.

“After critical rumination over these reasons, we are of great concern over the humiliation and shame that the style of leadership of Mr. Ayodele Fayose has brought upon the people of Ekiti within his short time in office, we hereby pray that as a matter of urgency, the Economic and Financial Crimes Commission wades into the financial situation of Ekiti State, and conducts a financial auditing from the 16th October, 2014 till present the present month, and asks questions on how the fund Ekiti State government got from the federal government as bailout was appropriated or misappropriated.

“We also call on the National Drug Law Enforcement Agency to conduct a serious search on the Mr. Fayose, and his personal business associates. As we are not unaware that Mr. Fayose most times acts under the influence of hard substances (drugs) and his involvement in illicit business transactions. We pray that quick medical attention is granted to Mr. Fayose, as we are of strong believe that he is psychologically unstable, thus requires psychiatric attention,” they said.