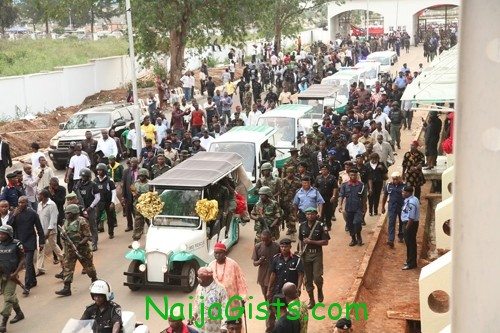 The final burial rites of the late Dim Odumegwu Ojukwu had a national stamp on it today in Enugu with the presence of Vice President, Namadi Sambo, representing President Goodluck Jonathan. naijagists.com

Jonathan said that Ojukwu had in death brought healing to the crisis associated with the Civil war and Nigeria’s chequered history.

The remains of Ojukwu were brought into Opara Square at about 11 a.m. by top military officers in company of his wife, Mrs. Bianca Odumegwu-Ojukwu and her children.

After the military burial formalities by a team of clergy drawn from the different denominations, tributes were paid by prominent Nigerians and former Ghanaian head of state, Ft. Lt. Jerry Rawlings.

Mr. Sullivan Chime, the host governor, said it was not by coincidence that the final national burial took place in Enugu because Ojukwu lived his remarkable life in the Coal City of Enugu.

Chime said Ojukwu governed the old Eastern Region from Enugu and married his beautiful wife Bianca from there.

Governor Amaechi said that with the Civil war fought by the Igbos led by Ojukwu, Igbos can no longer be ignored in the political equilibrium of the country.

Monisgnor Prof Obiora Ike in his brief tribute described Ojukwu as one personality so controversial and most misunderstood by his family, friends and the political class.

Ironically, he said,Nigerians seem to have come to terms with the reality of his vision that every human being should be treated equally no matter the race and ethnic background. (culled from PM)