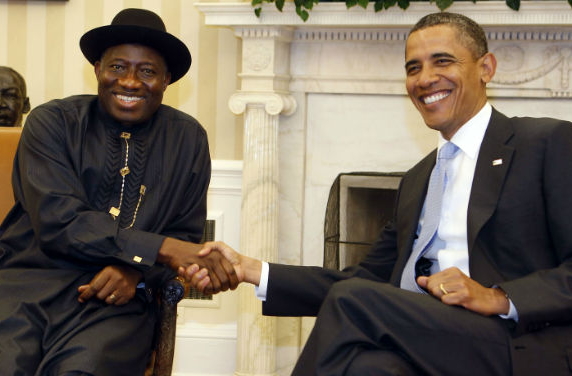 May 2nd, 2017 – How Ex-President Jonathan Delayed Senate From Passing Anti Gay Bill Because Of Obama

Mark made this claim in ‘Against the Run of Play’, a book which chronicles how Jonathan lost the 2015 presidential election, written by Olusegun Adeniyi, a journalist and bestselling author.

The former president’s relationship with the Obama administration was at first “rosy” before it became frosty.

In the book, Jonathan blamed Obama for his electoral defeat, saying in 2014 it became clear that the former US president wanted a change of government in Nigeria. This was after he had signed into law a bill prohibiting same-sex marriage.

Mark told Adeniyi that Jonathan caused a delay in the passage of the bill because of Obama.

“President Jonathan called me that President Obama had sent to him a message of concerns about the bill. That was in 2012 at a time Obama was seeking a second term in office,” he said.

“President Jonathan asked what could be done and I told him that not only was I committed to the passage of the bill that was also the position of the national assembly.

“I said the only thing I could do was delay its passage till after the American presidential election. But I assured him that the same-sex marriage was not something we would legalise in Nigeria.

“We delayed it for a few months after that, but we eventually passed the bill into law and President Jonathan had to assent.”

The National Assembly under Mark passed the same-sex marriage prohibition bill in May 2013. And Jonathan signed it into law on 13 January, 2014.

The law prescribes 14 years imprisonment for those convicted of homosexuality.