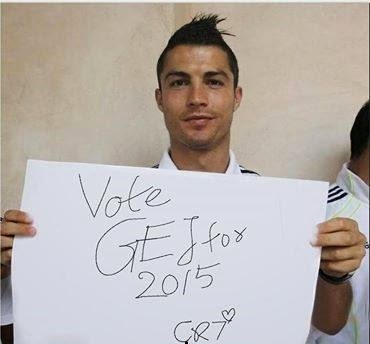 Popular Footballer, Cristiano Ronaldo has been photoshopped into a placard with the inscription,  “Vote GEJ for 2015-CR7.”

The liar liars claimed Ronaldo showed this in his dressing room on Sunday night.

Well the Real Madrid striker was contacted and he denied ever doing that.

He reportedly said he has no idea who Photoshop that and that he has never endorsed any politician.

GEJ fans una well done o. ‘clash’ for ya self