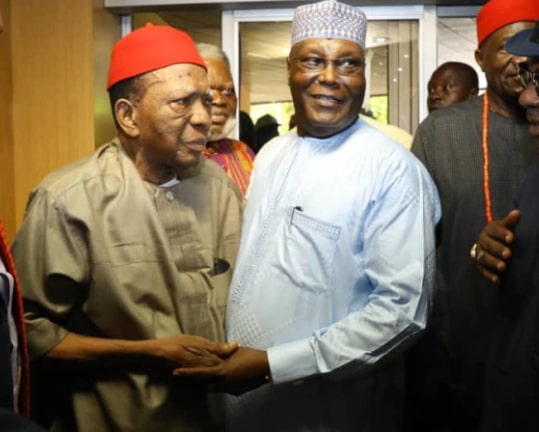 In 1999 the Constitution of Ohanaeze Ndi-Igbo was amended to include women and young persons. Ohanaeze also presents itself as a socio-cultural organization, pursuing the unification and interest of all Igbo. However, one would wonder what propelled its conduct against these highly held values. At present, there is an Igbo woman who is a presidential candidate, there is also an Igbo young man who is a presidential candidate, on the other hand many notable Igbo are of the All Progressives Congress (APC) supporting their own candidate, President Muhammadu Buhari, a position that is widely believed shall pave way for Senate president in 2019 and presidency in 2023 of Igbo extraction.

There are also some of Igbo brethren who are in the Peoples Democratic Party (PDP) in exercise of the their rights and to service their political interests. But considering the fact that a Vice President under the 1999 Constitution of the Federal Republic of Nigeria is under the whims and caprices of the president, therefore many do not consider it rational enough to wilfully relegate Ndi-Igbo to a second fiddle when there are other platforms offering us better and first class positions.

Flowing from the above, one would easily see the endorsement of the PDP presidential candidate, Alhaji Atiku Abubakar, by Ohanaeze Ndi-Igbo as a misrepresentation and an attempt to exert an undue influence to coarse innocent voters from the South-East into voting against their freely made choices as well as erroneously persuading the region towards a myopic perception of one party system, a political pattern which has the tendencies and capable of keeping the region behind her contemporaries when it comes to national politics.

The endorsement outside of being a misrepresentation is also a misleading and misguided act, service of self-political interest and sympathy which is never for the collective good and not premised upon the common conscience of Ndi-Igbo, it is also an attempt to use a goodwill, honour and esteem which we have collectively given to bamboozle and coarse gullible persons into voting Atiku, such conduct should not be encouraged and is condemnable, this is because going by what Ohanaeze professes to be, there are so many interests vested in that organization and all those interests own a collective right in the group and such rights under human rights law are classified under the third generation rights because it is a collective and group right. And no one holds the powers to validly exercise a group right unilaterally without first consulting universally with those who concurrently hold the same rights with him to secure a consensus ad idem before he acts, nemo dat quod non habeat, no one can give what he does not have.

Therefore, that Atiku’s endorsement by Ohanaeze is dead on arrival and void ab initio coming outside the consent of many important authorities who had sacrificed a lot for Ohanaeze Ndi-Igbo. An auspicious and innocuous humble advice here is that no one should use the respect and honour we give him to wrongfully impose things on us.

Who is more Igbo than the other? Respectable people whom sensitive positions and interests are entrusted into their care should learn not to use same to manipulate and override those who gave them such goodwill upon which their reputations flow. Ohanaeze Ndi-Igbo should not be used as a cloak of political manipulations and impositions.

This is democracy, save and except the said Ohanaeze has constituted itself into an extension or a support group of the PDP then we so urge the trustees to without hesitations do the needful by changing the object as provided under our laws. It amounts to approbating and reprobating at the same time for one to present himself as a holder of the conscience of the people and goes ahead to act unilaterally ad libitum without recourse to the feelings of the same people. Anybody can support Atiku, Buhari or whoever but must separate such support from Ohanaeze, not doing so is repugnant and at variance with equity, natural justice and good conscience.

If integrity still means anything to us, with most profound respect, it is not a justification that certain persons are founding members therefore would not separate their natural persons from the juristic person called Ohanaeze Ndi-Igbo, especially the highly learned ones who definitely know better. Such conducts worry some of us who are still very little; we presume founding fathers should still continue to set credible precedents as they have done in the past. We should separate our political interests from Ohanaeze, that will not vitiate the fact that we are the founding fathers, rather it will pass the test of reasoning and keep Ohanaeze as a neutral unifying body which it is represented to be, so that all can happily go back to Ohanaeze after the political patronages and elections

[About the author: Noble Agbaeze is the National Secretary/spokesperson, South-East Mobilization Movement for APC]