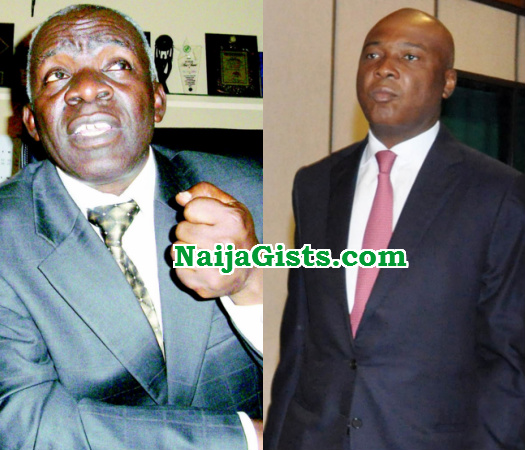 Human Rights Mr. Femi Falana, SAN, on Friday declared that President Muhammadu Buhari is not doing enough in his battle to rid the nation of corruption and recovers stolen wealth from looters.

Falana urged Buhari to muster enough “political will” to go after Nigerians who have deprived the country of her legitimate earnings through stealing and cheating, and caused them to return the I’ll gotten funds instead of seeking local or foreign loans to fund projects.

The Human rights lawyer who made this known at the Obas Complex, Oke – Mosan Governor’s Office, Abeokuta, the Ogun State capital, also faulted the Dr. Bukola Saraki – led Senate for approving the $5.5bn loan request put forward to it by Buhari.

Falana who was the keynote speaker at this year edition of the 78th International Students Day organised by the Ogun State government, said if unremitted funds in some federal government agencies, companies and others hidden offshore haven by looters were retrieved by Buhari – led government, there would be enough funds to execute projects instead of Nigeria going about with cap in hands begging for loans.

Speaking on the theme: “Restructuring, Pros and Cons: The Place of the Nigerian youth,” the legal luminary argued that what had been recovered from looters by the Federal government in the last two years remained a mere “tip of an iceberg.”

He said the bulk of the looted funds are still out there with the looters and urged the government to go all out to retrieve them.

He also lamented the state and standard of education in the South West, insisted that the zone was not doing well in education, saying the evidence could be seen from the recently released West Africa Examination Council results where the zone performed woefully.

He recalled that in his home state, Ekiti, excised from Ondo, there were times when most families in the state could boast of a professor each because they embraced Chief Obafemi Awolowo’s philosophy of education, lamenting that Ekiti is being governed today by a man who showed grave “contempt for education.”

“Look at Where are we in education in South west, from the last WAEC results, no State in South West made it to top 10 and that for me, is a shame. We need to go back to where we are coming from,” he said.

Falana urged the youths not to join those calling for the breakup of the country, saying those behind it are not only making “backward call,” but also fighting only for selfish interest.

He noted that for the country should leverage on her huge population potential to move forward and erect knowledge based system.