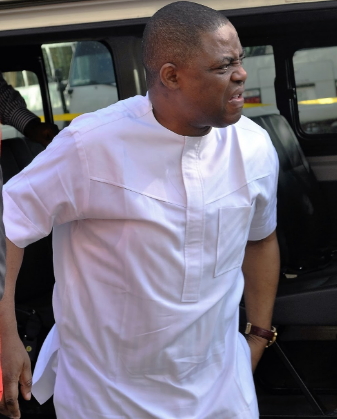 The first prosecution witness in the trial of former Minister of Aviation Chief Femi Fani-Kayode yesterday told Justice John Tsoho of the Federal High Court, Abuja that the Peoples Democratic Party (PDP) chieftain got N26 million from the Office of the National Security Adviser (ONSA).

The witness, Mr. Victor Ehiabhi, a policeman attached to the Criminal Investigation Department (CID) in the last 13 years, said he was deployed to work with the defendant as his security aide.

Led in evidence by the prosecution counsel, Mr. Johnson Ojobane, the witness said his duty was secure Fani-Kayode’s family and his properties.

Ehiabhi, who was told by the prosecution counsel to explain to the court what happened on November 21, 2014, said:On that fateful day, Chief Femi Fani-Kayode travelled out of town and he told me to be in his house.

“The domestic staff were around the premises. While he was away, I was at home. The house is located within Aso drive.

“The domestic driver named Kenneth was directed to drive us to the Villa.

“While at the Villa, the driver was asked to stay in the compound while I and Esther walked into the building.

“So, we identified ourselves as personnel of the defendant. The staff in the office asked who is Victor and I told him that I was the one.

“I was asked to tender my identity card and I did. The man in the office brought out a paper for me to endorse on behalf of the defendant and the large amount of money was written on the document for the defendant.

“I initially decided not to endorse the document on behalf of the defendant.

“The man in the office insisted that I am supposed to endorse the document and so I did.

“The same man in the office gave the money in a Ghana must go bag to I and Esther.”

He added: “We then took it out of the office and put it in the boot of the car. We departed from the office and headed to the defendant’s house with the money.”

“At that time, the defendant was not yet back.

“The defendant called again that I should ensure maximum security within the house until his arrival.

“On that same day, at about 11pm, the defendant returned from his journey and he acknowledged the money and thanked us for what we did for him.”

Asked by Ojobane, what happened subsequently and how he got himself involved with the Economic and Financial Crimes Commission (EFCC), he said:

“I was invited by the EFCC and when I got there, I was asked whether I had worked with the defendant before and my answer was yes.

“I was made to write a statement and that I did.”

Justice Tsoho adjourned till June 6, for cross-examination of the witness and continuation of trial.

The EFCC, on November 11, 2016, arraigned Fani-Kayode on five-count charges involving alleged diversion of N26 million, which he allegedly received from the then National Security Adviser, Sambo Dasuki, under the guise of payment for contract.

The ex-minister allegedly received the money from the Office of the National Security Adviser while he was the Director of Media and Publicity in the campaign organisation of ex-President Goodluck Jonathan.