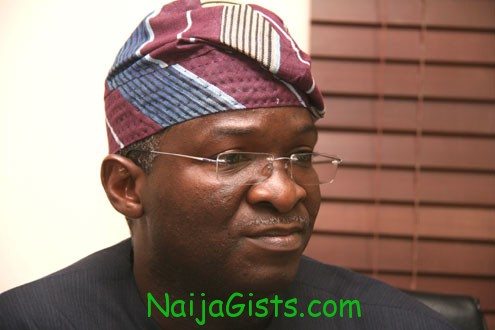 A showdown is imminent between landlords and tenants in Lagos State as Governor Babatunde Fashola has asked tenants to deduct five percent as withholding tax from the rent payable to their landlords and remit same into government purse naijagists.com.

The governor said the goal of the government in the new year is to aggressively collect withholding tax on consumption of goods and services.

“And we expect that they fairly collect, issue receipt and account for them. Once we have all of those documents and records, it should be easy for us at the end of the tax accounting year to set off all of these,” he said. The governor also said tax should be paid on gifts received by individuals and urged Lagosians to pay their taxes promptly so that government would have the money to carry out developmental projects.

Fashola added that churches and mosques who owned buildings used for business purposes were not exempted from paying taxes to the government because they earn income from such businesses.

“On the churches and the mosque, let us remember that whether it was a church or a mosque, it was first a building. And therefore, it is built with the same building materials that were used to build other private facilities.

“Nobody knows the difference at that time. And therefore, it cannot escape the regulatory law of the state in making building safe, it must comply. It is only when those who are ordained dedicate the building to the propagation of religion that it becomes a church.

“In the same way, churches own facilities. Churches who run businesses should give something back to the government. Render unto Caesar what is Caesar and render unto God what is God,” he stated.

Fashola appealed to Lagosians to be more tax compliant. “If more people voluntarily pay the right amount of income taxes, the government will find enough money it needs to transform the state,’’ he stated.

He explained that the only way to make life as good as they are in the other jurisdictions such as Europe was for the people to provide the government with more resources to do so.

“We have the idea; we have signed on to work and really, whether you think we can do it or not, I think our experience and our record in the past four years show clearly that even if you disbelieve what we say, the evidence before you today makes it difficult for you to disbelieve what we have done and it speaks of what we can do if you give us the chance,” he added

Governor Fashola said the role of tax consultants in the internal revenue drive of the state is to track and monitor revenues, payment that you make. “They don’t collect. The bills are still done by public servants now under the Internal Revenue Service.

“But at that time, our government did not know how many accounts it had and it did not know what was paid in. So, the money was there, depending on the benevolence of a bank that decided to be honest. But today, at the close of every business day, Lagos State Government can tell you how much it has collected and in which bank it is. That is the energy the consultants have brought,” he said.

Noting that organizations that provided services deserved to be paid, the governor declared, “they have provided service, they have invested in ICT. It is only fair that they be paid. The only issue that can arise is whether or not we are getting a fair deal for the service that they render. But the idea that somebody who rendered service in a free economy should not be paid is alien to me.”