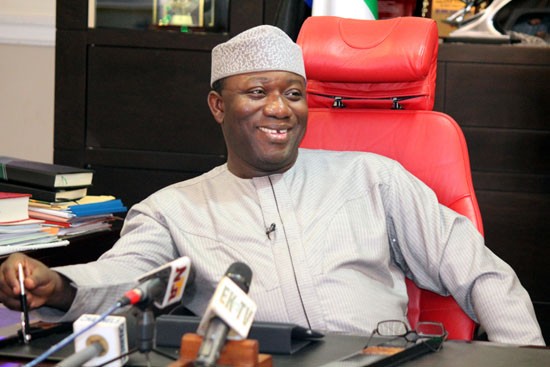 Ex-Ekiti State governor, Kayode Fayemi, yesterday, urged a Federal High Court in Ado Ekiti, to set aside a warrant of arrest issued against him by the House of Assembly.

The assembly had issued a warrant of arrest on Fayemi after he failed to appear before it for three times.

The lawmakers called on Inspector General of Police (IGP), Ibrahim Idris, to give effect to the warrant, to bring Fayemi to the the legislative chamber, to defend himself against allegation of misappropriation of State Universal Basic Education (SUBEB) funds totalling N852 million.

They also accused Fayemi of fraud in the award of contracts during his administration between 2010 and 2014.

But, Fayemi, in a suit filed by his counsel, Rafiu Balogun, said the action of the lawmakers was politically motivated and done in bad faith. Fayemi is demanding from the plaintiffs N500 million as general damages for the embarrassment, odium, contempt and public ridicule the issuance of the summons and arrest warrant has caused him having been widely circulated in the print, electronic and online media.

He said the summons and warrant of arrest were against the provisions of Sections 128 and 129 of the 1999 Constitution.

Joined as defendants in the suit are the Assembly, the speaker, the IGP and commissioner of Police, Ekiti State Command.

Fayemi is seeking a perpetual injunction of the court restraining the 3rd and 4th defendants from arresting him or giving effect to the warrant of arrest issued by the 1st and 2nd defendants in total disregard of the provisions of Sections 128 and 129 of the 1999 Constitution.

The former governor is also praying the court for a declaration that the issuance of the warrant to compel his appearance to answer questions on the N852 million UBEC funds are issues before a Federal Capital Territory (FCT) High Court and the Economic and Financial Crimes Commission (EFCC) to the knowledge of 1st and 2nd defendants and against the doctrine of separation of powers.

In the affidavit in support of the originating summons, Fayemi said he knew as a fact that Ekiti State Government did not constitute any judicial commission of inquiry or an administrative panel of inquiry to investigate him or probe his tenure, let alone finding him guilty or indicting him for any corrupt practice or misappropriation of funds.

He alleged that the resolution to summon him to appear before the Assembly and the subsequent warrant of arrest was a calculated attempt to embarrass him and done to water down the effect of a libel suit he filed at an Abuja High Court against a lawmaker, Samuel Omotoso and an aide to the governor, Lere Olayinka.

He said he prepared a comprehensive handover note of his stewardship of four years which was made available to the lawmakers, adding that it was in recognition of his zero tolerance for corruption and selfless service to humanity that he was appointed minister by President Muhammadu Buhari.

Continue Reading
You may also like...
Related Topics:ekiti house of assembly, Fayemi, sue