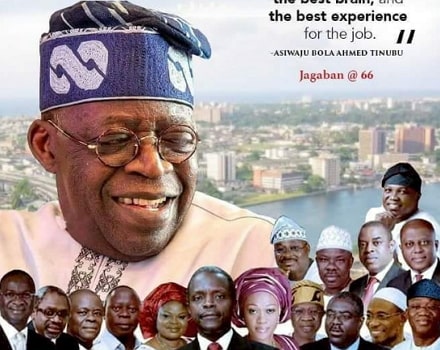 Asiwaju Bola Ahmed Tinubu’s political victories fit into Arnold Toynbee’s figurative description of a mighty, always-winning America, which the British historian said is like a large, friendly dog in a very small room. Every time it wags its tail, it knocks over a chair. And it is almost like America saying: ‘sorry, we do not go about with the intention of knocking chairs; but whenever we go about, we can’t help it, some chairs have to get knocked over!

And so, penultimate week, the political tail of the Jagaban had to be wagged, in the land of the Omoluabi; and many heady, especially mal-positioned chairs had to get knocked over. And the opposition, little aware of the extent of our massive size, and the innocence of our shifty tail, is crying ‘blue murder. And can Tinubu’s APC say: ‘sorry, we do not go about with the intention of knocking chairs; but whenever we go about, we can’t help it, some chairs have to get knocked over!

But I say that Tinubu is more like the cubs-tutoring mother cheetah, which at once scotches the game half-dead and set it loose (so her little ones can cut their teeth in the art of hunting). But the cheetah is equally at once the ruthless instinctive killer, which will quickly step in to take care of business if it appears the fangs of her little cubs are failing to shut the windpipe of the scotched prey-game.

The political cub-cheetahs in my home state of Osun had almost let the scotched impala regain its breath and its lost stamina, and it had almost eluded the hunter’s strap-bag for good. The feeble teeth of the kids at home had failed in the first grip to pierce the windpipe of the enemy; and it had to require the intervention of the master, in a last-minute encore to wrap up a near-tragic outing.

All the adrenalin we had to battle with to cope with the anxiety of overcoming the political Goliath in 2015, it had now taken nearly as much hormone to fight to avert the loss of Osun State. And it had suddenly seemed that the battle was as exacting to win Nigeria as it had turned out also to be, to secure just one of the many states in a remote corner of the country. No thanks to underestimating the rigging prowess of the enemy.

The foot soldiers in Osun had not done their job well. By not ‘crushing the enemy totally, they had violated ‘law number 15’ of Robert Greene’s and Joost Elffer’s book, The 48 Laws of Power. It warns: “If one ember is left alight, no matter how dimly it smolders, a fire will eventually break out. More, it says is lost through stopping halfway than through total annihilation: the enemy will recover, and seek revenge. Crush him, not only in body but in spirit.

But the foot soldiers in Osun hadn’t been Machiavellian enough. They had in fact first violated the most important rule of warfare: not to ever underestimate the enemy! But as Shakespeare would say, to always weigh the enemy mightier than he seems; so that the proportions of defense are filled. They thought that a happy-go-lucky-dancer with bacon fats where men have brains would pose no threat. They blushed at killing a fly, with a sledge-hammer. Forgetting that all is fair in war and that ‘ten-to-one should be no impeaching of valour.

But thanks to the Jagaban, a judicious use eventually was made of Green’s second law of power, namely to ‘learn how to use enemies. SDP’s Omisore could not have fit the role better. Said Greene: Hire a former enemy and he will be more loyal than a friend because he has more to prove. But in this case Omisore, in addition to proving something, also has something to gain.

The army of good had fought a virtual Armageddon against an invincible insurgency of the devil.

We have survived again a political rigging machine adept at all the electoral gerrymandering known to third world politics: from ballot box snatching to vote buying; from intimidation of voters to disruption of polling centres; from the stage-managing of victimhood to the manipulation of the media.

Obasanjo was the one who once struck at the political fields of the progressives in the Southwest, sending our feeble hapless sheep scampering in all directions. But he had failed to scare the shepherd, Tinubu, off the Greenfield. The Lagos stronghold of the Jagaban was a fortress even the Ota farmer’s do-or-die politics could not penetrate. And thanks to that standoff by the Jagaban, one after the other at last, the scampered sheep of the wild, wild West are back home in safety.

The last frontier, Osun, has been re-possessed to seal the sheep ranch; and the shepherd, Jagaban can now sing hosanna in the highest – that he has at last, brought back home full numbers. All the lost sheep of the house of Israel have now been found.

[About the author: Akerele, a former PA to late MKO Abiola, is Atunwase of IjeshaLand]

Continue Reading
You may also like...
Related Topics:lost, sheep, tinubu