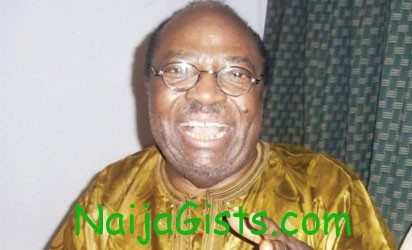 Former National Auditor of the Peoples Democratic Party, Chief Godwin Daboh, died on Thursday in Abuja at the age of 70. naijagists.com

Daboh, a septuagenarian, passed on at the Garki General Hospital, Abuja, according to the Chief Medical Director, Dr. John Olagunju, who confirmed the death.

Until his death, Daboh was the Chairman of the Move Nigeria Project and the Benue Elders’ Forum.

He was also an anti-corruption crusader and the publisher of the defunct Broom.

He is survived by many children among who is Ms Dooshima Daboh, a former member of the House of Representatives.

In a statement by his Special Adviser on Media on Publicity, Dr. Reuben Abati, the President described Daboh as “a very active man who was not afraid to stand firmly for the principles in which he believed.”

He noted Daboh’s vigorous campaign and adroitness in mobilising grassroots support during the last presidential electioneering.

Meanwhile, Senate President David Mark has described Daboh’s death as a huge loss to the political class and the Nigerian nation in general.

Mark, in a condolence message to the government and people of Benue State, noted that Daboh was a political strategist and a goal getter.