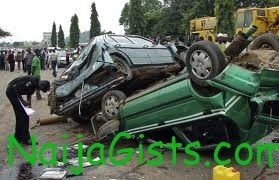 A truck driver and a woman were killed while 13 soldiers were injured on Thursday in a multiple accident at Kobape, along the Abeokuta-Sagamu Expressway, Ogun State. naijagists.com

Also, two persons died while several others were severely wounded on Thursday in another multiple accidents in Ijebu Ode, Ogun State.

It was learnt that five vehicles were involved in the accident, which occurred at Astok Petroleum, Ijebu Ode along Sagamu-Ore-Benin Expressway.

The crash, sources told punch reporters happened when a white Toyota Hiace conveying the soldiers skidded off its lane after a burst tyre.

The truck driver, simply identified as Nasco, was said to be on his way from Abeokuta to Ibiade in Ogun Waterside Local Government Area of the state when he met his untimely death.

The truck subsequently hit a Toyota Prado jeep, marked Lagos EJ 57 LND, which was also travelling on the same lane.

It was learnt that the soldiers were returning to Abeokuta after attending an undisclosed assignment in Ibadan.

They were said to have been rushed to the Federal Medical Centre, Idi-Aba, Abeokuta for medical attention.

One of the survivors, Mrs. Josephine Ojo, said she was inside the jeep with two other occupants when the accident occurred.

She said, “We were heading to Lagos from Abeokuta when the bus conveying the soldiers suddenly went off balance and swerved to our own side of the road.

“The bus collided with the truck which in turn swerved to our side and rammed into our vehicle. It was a miraculous escape for us.”

The FMC Public Relations Officer, Mr. Segun Orisajo, confirmed the accident, saying “some soldiers were brought in this afternoon and they are being attended to.”