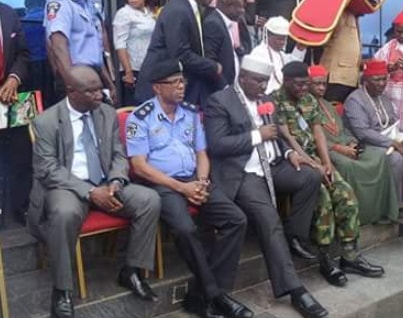 Imo State sits at the heart of Igboland and is usually referred to as the Eastern Heartland. But recently, the state has been in the news not for its rich Igbo cultural heritage or her great human and material resources but for the wrong political reasons.

Whether it is about erection of effigies of foreign leaders or politics of nepotism and exclusions, the truth is that all is not well with the state. With the palpable ominous signs in the political ambience of the state, caution should be the watch-word.

In Nigeria, intra-party crises are always carpeted as family affairs but it is yet to be seen how APC will handle its current myriads of political intransigencies and the corollary parallel political structures in many states.

Either as a way of punishing the incumbent governor of Imo State who had denounced the tenure elongation of the out-gone National Working Committee of the party or an attempt to stop the imposition of his son-in-law on the party, some party members became willing tools used to humiliate him.

In Nigeria, it is an acceptable norm since the inception of the fourth republic that heads of the executive arm from the ruling party also double as leaders of their parties whether at the state or the federal level. But in what was generally seen as an aberration in Imo State, the incumbent governor was even denied the privilege of either knowing the venue of the said congress or sighting the electoral materials.

This situation informed the press briefing by the governor with heads of security operatives in the state where he declared that there was no congress in the state. But the party’s appeal panel ignored all that and went ahead to affirm the congress and the controversial party officers were sworn in amid all legal encumbrances.

But the outcome of the party’s national convention has left no one in doubt about who still calls the shot in the party. It was therefore too early and of course infantile for some people to have boasted that they have washed the governor’s hands from the politics of the state.

Though with his imperfections and indiscretions, the governor, Rochas Okorocha would still remain a reliable bridge which the party would find very useful to access not only Imo State but the entire geo-political zone.

The governor may have felt betrayed as those he had fed ended up biting his finger, but what makes great leaders is not the pound of flesh taken from the offenders but how much they are willing to forgive.

While vengeance is sweet when an opportunity presents itself but the late anti-apartheid legend -Nelson Mandela taught the world an important lesson as he forgave those who incarcerated him for more than a quarter of the century.

The reconciliation committee set up by the state government elated many of us who are friends of the state. But the gale of suspension now blowing against perceived enemies in the state assembly and the rumoured plot of impeachment of the deputy governor should be handled cautiously.

Yes, this is obviously about the next election but one should not be oblivious of the next generation. The current callous blood-letting in the country should call for restraint as the hapless citizens would be at the receiving end of all these needless political tussles.

We still hope that reasons will prevail over vengeance and true reconciliation would engender the much needed peace in the state.

Continue Reading
You may also like...
Related Topics:Crisis, imo state

Nigeria Is Dying, Get Help President Buhari – Wole Soyinka
Blame All Political Violence In Nigeria On These Fourth Republic Politicians