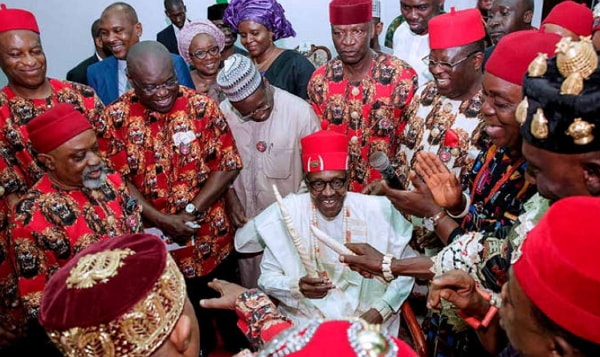 Top Igbo leaders, Chieftains and members of the All Progressive Congress (APC), on Tuesday converged in large number in Owerri, the Imo State capital for a mega rally with a promise that the Southeast zone will support President Muhammadu Buhari’s re-election in 2019.

They noted that the Southeast has benefited immensely from President Buhari’s administration in the last three years, more than what they got for the 16 years of the People’s Democratic Party (PDP) administration.

Apart from this, the APC leaders said that supporting President Buhari’s second bid will brighten the chances of the zone to produce Nigeria’s president in 2023.

Speaking at the Dan Anyiam Stadium, venue of the event, the Igbo leaders took turn to highlight some of the landmark achievements the Buhari’s administration has recorded in the Southeast, with special emphasis on the second Niger Bridge and the Enugu-Onitsha Expressway.

Imo State Governor and Chief Host of the event, Rochas Okorocha, said that what President Buhari is doing in the Southeast has endeared his administration to the people.

In his words, “what we are celebrating here is the leadership of President Buhari. It is true that the Igbo made a mistake in 2015 but the Igbo believe in Buhari for 2019 and the Igbo are ardent followers”.

Kano State Governor, Abdulahi Umar Ganduje in his speech acknowledged that the Southeast are truly in support of the President’s reelection.

He said, “With what I have seen today, it is clear that the Igbo has made a u-turn in politics and they are now in the centre of politics in Nigeria. I am impressed with the massive support for the APC and Mr. President”.