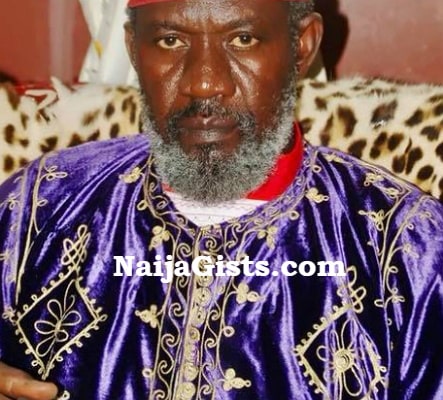 The Founder and Spiritual Leader of Liberation Temple of the Absolute God, Dr. Ramas Asuzu, has predicted victory for the All Progressives Congress’ presidential candidate in the February election, President Muhammadu Buhari.

Asuzu gave the prediction while speaking with journalists in Nri, Anaocha Local Government Area of Anambra State on Sunday.

“Since this election build-up, I have been asking questions in the spiritual realm. I consulted the spirits, the ancestors and the oracles; what they all told me is that Baba is on top,’’ he predicted.

He, however, warned that there might be upheaval over the outcome of the election, and called on Nigerians to pray hard against post-election violence.

“When I inquired further who the ‘Baba’ was, they said ‘Sai Baba;’ so, APC will win the election, but it is going to stir uprising. There may be bloodshed. That is why I am calling on Nigerians to pray fervently.’’

Asuzu, who is also called Eze ji ofor Ndi Igbo (custodian of Igbo culture), described the Buhari-led administration as a necessary national intervention, noting that the country was headed for the woods at the time of its assumption of office.

He lauded the policy of the administration which, he said, had encouraged growth in the sector and was leading it to self-sufficiency in food supply.

“What I am seeing is like what I saw in 2013, when a merger that took over government was revealed to me. I called on the government of the day then to reshuffle its cabinet but he refused, and in 2015, it came to pass.

“We thank God for the intervention of the All Progressive Congress government led by President Muhammadu Buhari that has checked corruption to an extent.

“Nigerians may be hungry now because this administration came in when oil price was around $30; later, we went into recession, but they were still able to build infrastructure.

“Again, the agriculture sector has grown because of the policy of this government, more people are now farmers; states are now competing in rice production and importation which used to cost us billions of Naira has reduced,” he said.

Asuzu said he was a Peoples Democratic Party sympathiser, adding that it would not becloud his spiritual vision.

“Buhari should stop vindictiveness because Nigeria has been fair to him enough. He should apply the federal character in his appointments and be fair to all.

“As a person, I am Atikulated; I remain a strong member of PDP here in Anambra, I support their programmes. But that will not make me to change what I see as a prophet.

“I am the crowned custodian of Igbo culture and worshiper of the Absolute God. PDP may be good for Nigeria, but they will not win,” he said.

The prophet, however, urged Buhari to use his God-given power for the good of all Nigerians and not to pursue vendetta against those he felt had opposed him.

“I worship the Absolute God and he has told me that Buhari will remain in office; the warning now is that Buhari should not use his position to witch-hunt people again.

He identified the system of election as a major challenge to the credibility of elections and called for a return to the Option A4 system.

He said the Independent National Electoral Commission should be able to understand the enormity of their role as umpire and give Nigerians a credible election.

“Since Independence, there has not been a free election apart from the one conducted by Prof. Humphrey Nwosu in 1993, using the Option A4. The system we have now encourages rigging; that is why people don’t accept results.

“So, I am saying that if we want to be true to ourselves, let us go back to Option A4 system where people will line up and be counted,” he said.

Continue Reading
You may also like...
Related Topics:Atiku, Buhari, win