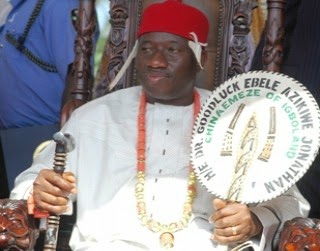 A war of words broke out at the weekend in Awka, Anambra State, during the Igbo Lecture Series organized by Ohaneze Ndigbo to mark the 2014 Igbo Day celebration. The National Chairman of United Peoples Par­ty (UPP), Chief Chekwas Okorie and the acting President of the Ijaw National Con­gress, Charles Ambaiowei, disagreed over Igbo’s support for President Goodluck Jon­athan’s presumed second term ambition.

At the lecture which held at the Women Development Centre, Awka, Chief Okorie had in his address which received a loud ovation from the audience, resented the unsolicited endorsement of Jonathan’s re-election bid by the Igbo, stating that endorsing the President without any negotiation or concrete promise to the people of the South-East amounts to sycophancy.

Okorie wondered when and why Ndigbo suddenly lost their bite, to the extent of following members of other ethnic nationalities sheepishly without asking questions or seeking to know what was in a game for them. He said: “When I look around me, I see 1,000 Igbo men who are more qualified than Jonathan, when I look again, I see more than 2,000 Igbo men that are more qualified than Buhari and Atiku put together. So, what are they telling us?

“My problem is not just that the Igbo have no good leaders to negotiate for them, my main problem is that they do not even have the teeth to bite any longer.

The UPP boss, however, distanced himself from any endorsement or adoption that President Jonathan might have received from some Igbo leaders, including Ohanaeze Ndigbo, stressing that his party would field an Igbo presidential candidate next year.

He said, “I have nothing against Jonathan, but I believe that we should negotiate before we adopt, and not adopt before we negotiate. I don’t know when Igbo grew this cold.”

But reacting to Okorie’s speech, Ambaiowei, who is a former commissioner in Bayelsa State under Jonathan as governor, said the UPP’s boss claims were very far from the truth.

He said there was an existing partnership between the Igbo and the Ijaw nation, urging Okorie and his likes to rather think of how to utilize the said relationship to consolidate their stay around the corridors of power, with the hope of taking over from Jonathan after 2019.

He said, “I was on my way coming here (Awka) when I got a news alert on my phone that ‘Chekwas Okorie blasts Jonathan,’ and later I was told that Chekwas will be here and I said it will be good for me to see him.

“What I am saying is that with the partnership we already have between the Ijaw and the Igbo, we are asking our brothers here to support Goodluck Jonathan to complete his second term, and after then, we will now ensure that Jonathan hands over to the Igbo.”

However, President-General of Ohanaeze Ndigbo, Gary Igariwey, reiterated the Ohaneze stand on the matter, stating that though it was the turn of the Igbo to produce the president, they would shelve their aspiration if Jonathan declares interest.

He said he would not join issues with Okorie as he (Okorie) is a respected Igbo son, and had spoken as a politician he is. Igariwey said there was the need to call on Igbo at home and in the Diaspora to join in the collective struggle to build Igboland and make it the pride of the Igbo.

Speaking to newsmen on the Igbo Day celebration today, the President-General of World Igbo Congress (WIC), Chief Nwachukwu Anakwenze, said it would focus on calling on Igbo in the Diaspora to return. home and help build up the Igbo nation