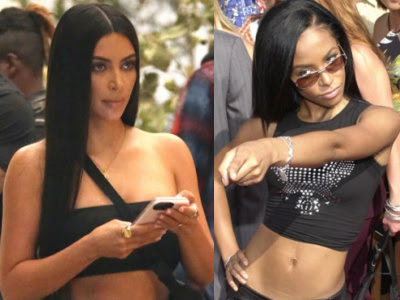 Nov 4, 2017 – I’m Not A Racist – Says Kim Kardashian As She Apologises Over Aaliyah Halloween Costume

Reality TV star Kim Kardashian West is apologising to whoever is offended by her Aaliyah Halloween costume.

Kim K had, as one of her costumes for the 2017 Halloween, dressed as the late RnB icon, a move that elicited criticism from people on social media, who described it as offensive.

“Legend or not Aaliyah is a black woman and you’re not. It’s offensive and you shouldn’t push this limit, but ok…,” a user had written.

Now, according to People, the reality star has apologized for wearing the costume.

“When I was deciding what I wanted to be for Halloween this year, I had a lot of ideas that I narrowed down to musical icons and my second costume was Aaliyah,” she wrote on her website. 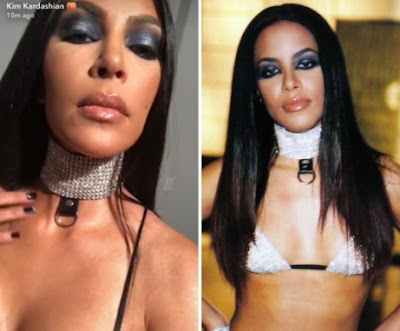 The look was inspired by what she wore in her ‘Try Again’ music video. I wore a custom bra top and J Brand leather pants. Ariel Tejada did my makeup and Chris Appleton did my hair.

“Aaliyah was such an amazing singer and she will forever be a music legend. I saw online that some people thought my costume was in poor taste and I am truly sorry if that offended anyone.

When she was creating the costume, she said, she wasn’t dressing as a race or a culture, but as a woman she’s always admired.

When I was creating the costume, I wasn’t dressing up as a race or culture but rather as a woman whom I will always admire. I play every kind of genre of music in my home and I like for my kids to be exposed to many different artists.

For me, it’s always about love and respect. I loved that Kourtney was Michael Jackson for one of her costumes, and that my son was Axl Rose.

We don’t see color in my home. We were paying homage to people and artists we love and respect— it’s that simple!”

Continue Reading
You may also like...
Related Topics:kim Kardashian, racist