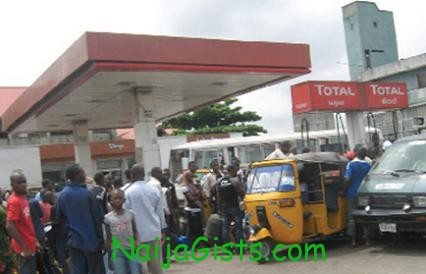 In a country with power instability, Fuel subsidy removal has definitely triggered double increase in the price of fuel. naijagists.com

To those who’re not aware, below are the top 3 possible side effects / negative impact of fuel subsidy removal in Nigeria.

1) Increased price of fuel and other petroleum products

3) Increased price of food products. The list goes on and on.

As a result, the Joint Action Front, the umbrella body for pro-labour civil society groups in the country, has rejected the removal of subsidy on Petrol and the hike in pump price of the product and called for civil disobedience by Nigerians to force president Goodluck Jonathan to rescind the decision announced , Sunday, by the petroleum Products  Pricing and Regulatory Agency, PPPRA.

In a statement titled “NIGERIANS, ARISE NOW TO RESIST THE WICKED HIKE IN FUEL PRICES”, JAF said government action had reinforced the group resolved to begin a mass action and protest nationwide from tomorrow against the policy and urged Nigerians to turn up en-mass for the protest starting from Lagos.

The statement by Dr. Dipo Fashina and Comrade Abiodun Aremu, JAF’s Chairman and Secretary, respectively advised Nigerians not to buy petrol above N65 per litter and shut any filling station that sells above N65.

According to the statement “The Joint Action Front (JAF) – the pro-labour civil society partner in the Labour and Civil Society Coalition (LASCO) – has just learnt from media report that the Federal Government (FG) through its agency – the Petroleum Products Pricing Regulatory Agency (PPPRA) has formally removed the so-called subsidy in PMS and hiked prices of Premium Motor Spirit (PMS) popularly known as petrol from N65 to N141.

According to the statement signed the agency Executive Secretary – Reginald Stanley, it stated that “Following extensive consultation with stakeholders across the nation, the Petroleum Products Pricing Regulatory Agency (PPPRA) wishes to inform all stakeholders of the commencement of formal removal of subsidy on Premium Motor Spirit (PMS), in accordance with the powers conferred on the agency by the law establishing it, in compliance with Section 7 of PPPRA Act, 2004.

By this announcement, the downstream sub-sector of the petroleum industry is hereby deregulated for PMS. Service providers in the sector are now to procure products and sell same in accordance with the indicative benchmark price to be published forthnightly and posted on the PPPRA website. Petroleum products marketers are to note that no one will be paid subsidy on PMS discharges after 1st January 2012”.

“We strongly condemn the Jonathan presidency for this wicked hike in prices and its decision to inflict unnecessary suffering and punishment on Nigerians.

In anticipation of the introduction of this wicked increases in fuel prices, JAF has its media briefing on December 21st 2011 declared that Nigerians should begin MASS ACTION effective from Tuesday, January 3rd, 2012.

Where is Nigeria heading to, who are our leaders?