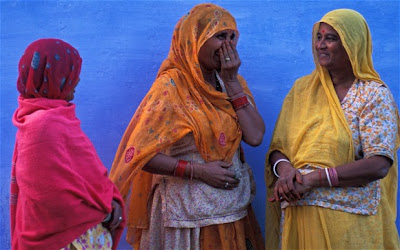 A small community in Indian has introduce a new law banning women under 40 from falling in love.

Asara village which is located in Baghpat District of Uttar Pradesh province, only 40km northeast of the capital New Dehli, issued the Taliban-like diktat banning women under the age of 4o from falling in love, using mobile phones or going out in public unescorted, the Irish Times reported.

The new law also requires women to cover their heads when they are away from home.

The council says women who defy the order against falling in love amongst other things will be ostracized and expelled from the community.

Mohammad Mokam, a council member, says the council will consider “other ways” to enforce the new “instructions” at a later point.

Village council leaders believe falling love and marrying for love is “a shame for the society” and dents the “respectability of the girl’s family”.

Those who opt for love unions will not be allowed to live in the community.

According to the Irish Times report, the Muslim-dominated Asara village council came up with the laws after several young women complained of sexual harassment.

However, social rights groups appalled by the archaic law have dismissed the reasoning, saying the council should have taken action against those accused of harassment instead of restricting the women in a “barbaric and mindless move”.

“The diktat also violates the tenets of the constitution where equality for all is guaranteed,” said Ranjana Kumari, head of the Centre for Social Research in New Delhi.

“The government cannot allow such Taliban-style functioning of the village council. A woman who is legally of marriageable age should be allowed to choose her partner and have a say in who she wants to wed,” said Sudha Sunder Raman of the All India Democratic Women’s Association.

Raman said the thought that women up to the age of 40 can be thus controlled is “chauvinistic” and contrary to civilized behavior.

Asara village is not unique in enforcing “instructions” like these. Many communities in the northern part of the large and diverse country have issued similar “fiats” restricting women. In more severe cases, “honor killings” target women and girls who violate the rules and marry of their own volition. (Irish Times)