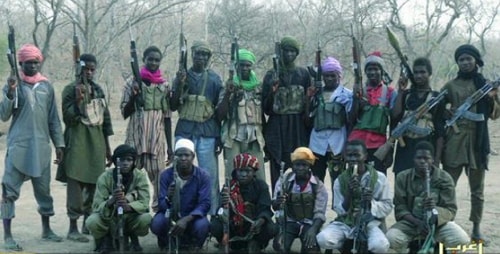 A faction of Boko Haram known as the Islamic State in West Africa has seized some towns in Borno and Yobe states, providing protection to Muslim residents and collecting taxes from them, Reuters reports.

The Federal Government and the Defence Headquarters have, however, described the report as a tissue of lies.

ISWA, which is led by Abu Musab al-Barnawi, the son of Boko Haram founder, Muhammed Yusuf, reportedly, gives out seeds and fertilisers and provides safe pasture for herdsmen for a fee.

According to herdsmen who spoke to Reuters, ISWA provides safe grazing for about N2,500 ($8) a cow and N1,500 ($5) for smaller animals. ISWA also runs slaughterhouses for the cattle, taking a cut for each animal, as well as from other activities like gathering firewood.

The group, which is said to have between 3,000 and 5,000 fighters, is believed to have strong links with the Islamic State of Iraq and Syria, the world’s most notorious terrorist organisation.

Its fighters have the power to carry out targeted attacks like the February kidnapping of 100 schoolgirls from Dapchi and a deadly raid on a Nigerian military base in March.

A map produced by the United States development agency in February and seen by Reuters shows how ISWA territory extends more than 100 miles into Borno and Yobe, where the Federal Government claims terrorists have been ‘technically defeated.’

The US map paints a similar picture, with ISWA operating in much of Borno.

“Islamic State has a terrible reputation for being so brutal around the world, and people can’t imagine an Islamic State faction could be more moderate (than Boko Haram),” said Jacob Zenn, of The Jamestown Foundation in Washington D.C.

The Lake Chad countries – Nigeria, Niger, Chad and Cameroon – have long neglected the region, allowing ISWA to create a stronghold from which to launch attacks. Its gains contrast with setbacks for ISIS.

ISWA’s territory is not completely secure, however, as the Nigerian Air Force often bombs, and troops from Lake Chad countries attack the insurgents’ domain around its shores and islands.

The military has announced an operation “to totally destroy Boko Haram locations in the Lake Chad Basin” – ISWA’s domain – and end the insurgency within four months.

But ISWA has so far proven intractable in its Lake Chad bases, where troops have been unable to make effective inroads, according to a Western diplomat who follows the group. The Nigerian military had “completely lost the initiative against the insurgency,” they said.

The diplomat said ISWA was ready to cede less important areas because the military cannot hold them. “However, they maintain absolute control over the islands and immediate areas near them where they train, live, etc.”

According to the report, ISWA protects locals from Boko Haram, something the Nigerian Army cannot always do. That, according to one of the people with knowledge of the insurgency, has won the group local backing and eroded support for the military.

ISWA’s leaders are low-profile, not appearing in videos or claiming responsibility for attacks, possibly to avoid the international media, and the ire of regional governments. Reuters was unable to contact the group for comment.

The report adds that Boko Haram and ISWA are bloody rivals, but some travellers in ISWA territory feel safer than elsewhere in Nigeria’s North-East.

“They have checkpoints for stop and search, and if you are a regular visitor they know you,” said a herdsman, adding that ISWA has spies everywhere, including informers who alert them to military attacks.