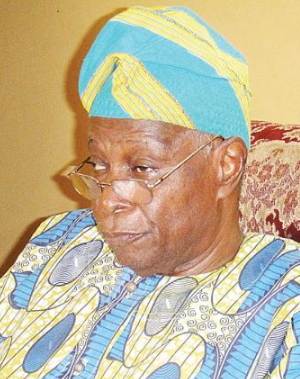 Ex-Secretary to the Government of the Federation, Chief Olu Falae, has submitted to the Economic and Financial Crimes Commission an email correspondence between him and a former Chairman of the Peoples Democratic Party’s Board of Trustees, Chief Tony Anenih.

It was learnt that Anenih, in the email, mentioned that he was acting on the instruction of former President Goodluck Jonathan.

A source at the EFCC told our correspondent that in the email dated March 2015, Anenih, who played a supervisory role in the Goodluck Jonathan Campaign Organisation, informed Falae that N100m had been approved by Jonathan and would be handed over to him (Falae).

A source at the EFCC said, “In the email, Anenih told Chief Falae, who is the Chairman of the SDP that N100m had been approved by President Jonathan as part of the agreement between the PDP and the SDP ahead of the presidential election.

“He further urged Falae to provide an account which the money would be paid into.”

The N100m, which was given to Falae by Anenih, was said to have emanated from the imprest account of the Office of the National Security Adviser in the Central Bank of Nigeria.

It was eventually paid into the account of Marreco Limited, where Falae is chairman. The fund was credited into the company’s United Bank for Africa Plc account, 1000627022, on March 25, 2015.

When contacted on the telephone, a spokesman for Falae, Mr. Alfa Mohammed, confirmed that 78-year-old Falae had submitted all correspondence between Falae and the PDP.

He said, “We had a letter of agreement between the PDP and the SDP regarding cooperation between the two parties for the election. There was an email from Anenih stating that Mr. President (Jonathan) told him to transfer the money to that effect.

“We have submitted everything to the EFCC, but the EFCC has not deemed it fit to invite Anenih which shows that it is people within the All Progressives Congress that are just trying to rubbish the image of Chief Falae, who has served meritoriously as a permanent secretary, a SGF and a finance minister.”

Mohammed said the PDP still owed the SDP about N70m and it was unrealistic of the EFCC to ask Falae to return the N100m.

He said Falae could not have known that the money emanated from the ONSA and thus could not be held liable.

The commission had finalised plans to charge the ex-SGF with conspiracy to indirectly retain the sum of N100m which he ought to have known formed part of the proceeds of an “unlawful act to wit: stealing.”

The EFCC had alleged in March that about N3.145bn was mysteriously transferred from the account of the ONSA to the account of Joint Trust Dimensions Limited, a company allegedly owned by the Director of Finance of the Jonathan Campaign Organisation, Senator Nenadi Usman.

Usman was said to have transferred N840m to the account of the Director of Publicity of the organisation, Chief Femi Fani-Kayode, in Maitama branch of the Zenith Bank with number, 1004735721, on February 19, 2015, while she allegedly gave Falae N100m on the instruction of Anenih.

A former Governor of Imo State, Achike Udenwa, and a former Minister of State for Foreign Affairs, Viola Onwuliri, according to some documents, got N350m in two tranches. The first tranche of N150m was paid into their joint account with Zenith bank on January 13, 2015. The second tranche of N200m was credited into their account with Diamond bank.

Usman and Fani-Kayode had been arraigned before the Federal High Court in Lagos and their accounts frozen while Udenwa and Falae are expected to be arraigned soon.

Attempts to reach the Media Adviser to former President Goodluck Jonathan, Mr. Ikechukwu Eze, were not successful as repeated calls to his mobile phones did not connect.

Similarly, a text message sent to his phones had yet to be delivered as of press time.

All attempts to speak with Anenih’s spokesman, Mr. Ojeifo Sufuyan, also proved abortive as his line did not connect, while a text message sent to his telephone had yet to be responded to as of 7pm on Sunday.

However, in a letter he had personally written to the EFCC in January, Anenih admitted that he received N260m for Jonathan’s election campaign out of which he gave Falae N100m.

He, however, maintained that the ex-President still owed him N180m.

Anenih had said, “I was not in a position to ask the former President how he was going to source the fund. I was not a direct beneficiary of the sum of N260m that was a part refund of the money I spent on the president’s instructions.

“A sum of N63 million was disbursed to a northern group, led by elder statesman, Alhaji Tanko Yakassai, for mobilisation and post-election peace advocacy in that part of the country.

“N100m was given to the National Chairman of the SDP, Chief Olu Falae, to enable the party to mobilise support and votes for the PDP presidential candidate since the SDP did not have a candidate for the election.”