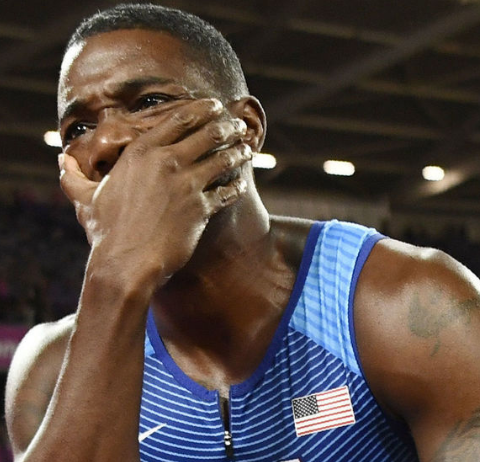 Justin Gatlin said it was sad that fans booed his victory in the world 100m final on Saturday, saying he had “done my time’’ for his doping offences — and Usain Bolt, the man he beat into third place, agreed with him.

Gatlin took the title in 9.92 but instead of acclaiming the remarkable success of a 35-year-old triumphing 13 years after he won the Olympic title, vast swathes of the crowd booed him in response to his two bans for drugs offences earlier in his career.

“It’s kinda sad that my boos were louder than some of the others’ cheers,’’ Gatlin told reporters.

“I wanted to keep it classy and at the end of the race bend the knee to Usain. Pay homage to him. This night is still a magical night for track and field and for Usain Bolt; he’s done so much in his career.’’

“Society does that with people who make mistakes and I hope track and field can understand that too.’’

“Over the years I’ve always said he’s done his time,’’ said the Jamaican, who was the first to hug Gatlin post-race.

“If he’s here, it’s okay. I’ve always respected him as a competitor. He deserves to be here, he’s worked hard.

“I treat him like any other athlete — as a competitor.’’

Gatlin was asked if he thought his victory had been a disaster for the sport.

“I wasn’t focused on the boos, I wasn’t thinking about whether my win tonight was a disaster for the sport,’’ he said.

“I really did it for my fans, my support staff, my countrymen, the people who really believe in me, even when I didn’t believe in myself,’’ he added.

“For the first time I was thinking about them not myself, and it took the pressure off.’’

He was similarly dismissive when asked if he enjoyed being the bad boy.

“I know you’ve got to have a black hat and a white hat but guys, come on,’’ he said.

“What do I do that makes me a bad boy? Do I talk bad about anybody, do I give bad gestures, don’t I shake every athlete’s hand, don’t I congratulate them, wish everybody good luck? That don’t sound like a bad boy to me.

“Usain is a great athlete and a great man and I’m just happy to be here lining up shoulder to shoulder with him. He leaves a huge void in the sport.’’

Continue Reading
You may also like...
Related Topics:booed, gatlin, Stage