Edo State police  have discovered an apartment where Improvised Explosive Devices (IEDs) are being allegedly manufactured.

The apartment, located at Iddo community in Estako East Local Government, was rented by Idris Hassa Abdulmalik, who pretended to be a driver plying Auchi-Abuja route.

Items recovered from the suspects showed they planned to attack Edo State and its environs.

Three of the suspects were yesterday paraded at the command for allegedly engaging in assembly of IEDs’ components. 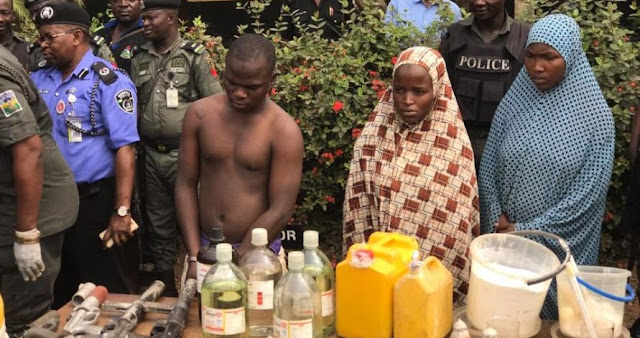 Those paraded were indigenes of Kogi State and were identified as Idris Ibrahim, 22, Zainab Ibrahim and Oyeza Abdul.

Idris Ibrahim is a brother of the main suspect on the run, Idris Hassan Abdulmalik, while Oyesa is his wife.

Abdulmalik escaped through a bush path after youths prevented him from escaping with his car, a Toyota Corola saloon car registered as ABC 371 HK.

Their activities were exposed when one of the already manufactured bombs exploded and killed one Sanusi.

The sound of the bomb caused panic, which led to the search of the apartment and recovery of other explosives.

Police Commissioner Babatunde Kokumo, who paraded the suspects, said the anti-bomb squad was called in to defuse the explosives, while others were taken away.