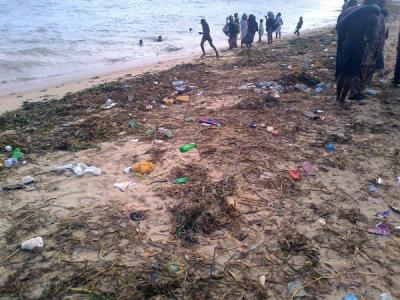 The shore line has been turned into a refuse dump, yet ticketeers claim to be collecting entrance fees for the maintenance of the beach.

One of the most popular beaches in Lagos, Bar Beach, has in recent times been over taken by refuse and waste material, which have made it both offensive to sight and most undesirable as a decent location for recreation and toursim.

A visit to the beach during the recent Eid-El-Kabir holiday revealed a very low turnout of fun seekers and holiday makers. This is not unconnected with the greatly receded beach line, much of which has been lost to the water, and the very untidy state of the beach.

According to the traders who sell at the beach, business was not good this Sallah as a result of the low turnout, compared to previous celebrations. Daily Times investigation revealed that the state of the beach, which has lost all its hitherto famous aesthetic value, was most likely responsible, as the few fun seekers who turned out could hardly enjoy the usual experience of being on the beach.

Most of the length of the beach area has been converted into a refuse dump of sorts, with heaps of odds and ends littering every space.

Curiously, at every entrance into the beach there were young men dressed in t-shirts, who identified them as ‘ticketeers’, issuing tickets at N200 per person, to every visitor to the beach.

These unruly young men, who are quick to frisk, embarrass and deny entrance to visitors who question their activities, much like Motor Park touts, claim to be issuing the tickets on behalf of the Eti-Osa Local government Area. This money, they claimed, was for the cleaning and maintenance of the beach.

Ironically, the beach is in a state of utter embarrassment which raises questions as to the genuineness of these tax collectors and what the Eti-Osa local Government is actually using the revenue generated from the beach entrance for. Surely, none of it is being used to clean or maintain that beach. It is high time the responsible authorities took notice and did something before this huge tourism site goes to complete ruins.

Sylva Ifedigbo is an advocate of good governance and believes in the use of creative writing and Journalism in addressing Africa’s socio-political issues. He is a graduate of the University of Nigeria, and has written extensively both on and off line. He currently lives in Lagos.