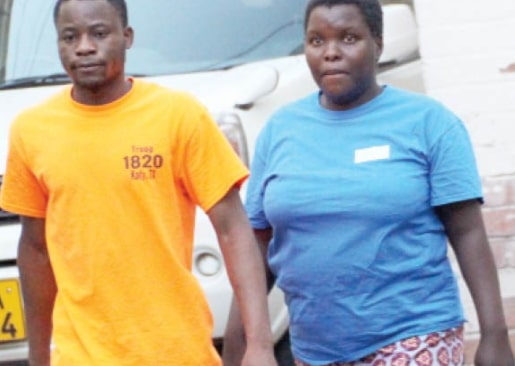 A young man man married his own aunt as it has been revealed that she is already two months pregnant for him, according to reports.

The man from Bulawayo in Zimbabwe, claims it was a pre-planned arrangement with his late uncle so that they could safeguard the family’s wealth.

Bmetro reports that Antony Mawewe (25) and his aunt, Chipo Mugati believed to be in her 40s got married following the death of his uncle Mike Mawewe on 3 December last year.

Antony’s father, Mawewe-Munyaradzi and the late Mike Mawewe were biological brothers, making the aunt his “mother” in a traditional sense.

According to a family source, Antony was also more than willing to marry his “mother”, and even told his aunt’s family he was going to pay off part of the bride price his uncle still owed them when he passed away.

“Shockingly, when Mike died and a few weeks after his burial, the family was stunned when they discovered that the two-Antony and Mugati — were now staying as husband and wife.

“When they were confronted by family members the two confessed that they were madly in love and were now staying together as husband and wife with Mugati saying that it all started at work during a joke which led to sex later in the night when they returned home.

“Chipo told the family gathering that she agreed to her nephew’s demand for sex and thought it was just to satisfy his sexual feelings, but somehow, it became a daily thing until they decided to get married,” said the source

Mugati confirmed the taboo relationship with her nephew and said they would not allow anyone to come between them.

“We started staying together in December last year when his uncle died. I don’t see anything wrong with that since the practice of a son inheriting his widowed mother is prevalent in my home area in Bikita.

Antony also echoed his aunt’s sentiments saying the marriage was a pre-planned arrangement with his late uncle so that he could look after the family.

“My uncle was the one who proposed that I take her in as my wife when he was ill at that time. This is because upon his death, he didn’t want her (Mugati) to go back to her family. When he died my family also saw it fit that I take over. I really love her and nothing will separate us. People should just come to terms with the news that I am the one who is now in charge. We are also not the first to have such a marriage arrangement,” boasted Antony.