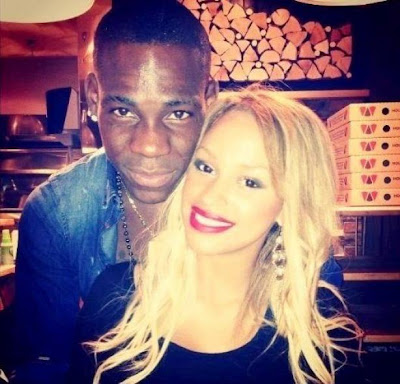 ‘If Real Madrid come back in Champions League, I’ll let my girlfriend sleep with them!’

Controversial Italian striker Mario Balotelli was quoted to have said the above as a bet for Real Madrid’s champions league victory.

Mario Balotelli allegedly made the remark about his new girlfriend of close to 7 months, Fanny Neguesha.

Mario who said if Real Madrid’s guys win the Champions League, he’ll allow them to sleep with his girlfriend free of charge.

Though he denied ever saying it, but the deed has been done as his Belgian girlfriend has dumped him for good.

In March, Mario said Fanny is the first woman he will ever feel comfortable with.

Mario Balotelli must be really heartbroken over this scandal.

Chai! the man suffer ….the next time you’re lucky to get another Fanny, you’ll watch your mouth.