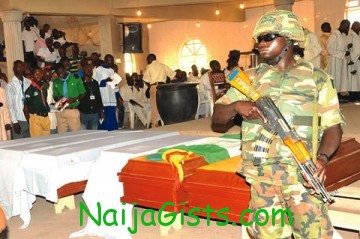 There was tension at St. Theresa’s Catholic Church in Madalla, Niger State on Wednesday during the funeral mass held for victims of the Christmas Day bomb explosion as the congregation prevented the Emir of Suleija, Alhaji Awal Ibrahim, from entering the church.

The Emir, who was said to have arrived the church at about 11.00am, was booed by the congregation with shouts of “No, no. We don’t want him here.”

Despite the intervention of some priests, the monarch was not allowed into the church to make any speech.

He was later driven off amidst tight security.

But reacting to the development, the Niger State chairman of the Christian Association of Nigeria, Rev. Musa Dada, said the Emir should have been forgiven.

He said, “When the bomb incident happened I was told that the Emir neither came nor sent anybody to the church about three days after until when the government queried him to explain why he refused to visit the church and sympathise with the victims.

“Although I don’t know his response but I understand he was given 24 hours to respond why he didn’t show that he was their Emir and royal father and didn’t bother to ascertain what had happened to them.

“This could be the reason why they (congregation) didn’t want him to be here. It is even better that he is not here; if he is here it would have been a very terrible embarrassment.

“He however later came to apologise and when cheques were presented to relations of victims, he was here to apologise for his inability to visit on time.”