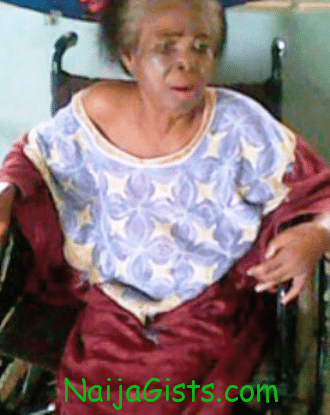 Helen Anayamelune, who was once the most beautiful girl in Nigeria precisely 1958 is currently in a bad situation.

Old age and sickness have ravaged her stunning beauty leaving behind what we call a helpless woman.

Presently, Helen is living in a state of sickness and abandonment. She is equally wheel-chair struck.

According to the National Mirror, About 53 years ago, specifically 1958, she was crowned the most beautiful girl in the country. That was before the country became independent. She was also the second young lady to be so crowned in the history of beauty pageant in Nigeria. With her emergence, she became the most sought after woman in the country. Many people wanted to be associated with her. But today, it is a different story.

Nobody wants to know what became of her, the beauty is faded, and the allure is gone. To compound it, she is penniless, after having spent all her money on the sickness that has ravaged her body. For Helen, an indigene of Ugbodu community in Aniocha North Local Government area of defunct Bendel State, now Delta State, the only time she was ever offered a lifeline was during the tenure of former governor of Delta State, Chief James Ibori. Narrating her ordeal in an interview with our correspondent, Helen seated on a wheel chair in tears said, ÒNigeria my country has forsaken me.

For several years now Miss Nigeria 1958 has been sick and confined to a wheel chair and no assistance of any kind. At this juncture, she burst into tears asking rhetorically again, What have I done to Nigeria to warrant this neglect that not even the government can come to my aid and assist me in whatever way it could?
I have been suffering from stroke for several years now and I know if the state or the federal government had come to my aid by now, my health would have improved and who knows, I might not have ended in a wheel chair like this. While appealing to government at all levels, NGOs, corporate bodies, individuals and leaders of Nigeria and Nigerians to come to her aid and not to allow the labour of their heroes past to be in vain, Helen lamented the situation where after promoting and making ones nation proud, you will then be neglected and abandoned by the same nation, upon suffering a misfortune. Still in tears, Helen in her seventies, ended up by saying that a nation that does not honour or come to the aid of her heroes when in difficulties, will soon have no heroes. Till date as I talk, I am alone, responsible for all my medical treatment; the bill is borne by me. I have sold all my property in Lagos just to take care of my present condition but all to no avail. If government, NGOs or anybody could offer me support, I will receive it wholeheartedly. This is a country I served diligently as Miss Nigeria.

Also speaking, Mrs. Gloria Chukwuneyenwa Nnemeke, immediate younger sister to Helen, disclosed that her elder sister contested the pageant when she was between 19 and 21 years of age, when she had just finished her secondary school at Wanemba community, now in Akwa Ibom State. According to Gloria, the ex-Miss Nigeria has gone through thick and thin in her present predicament and has been bed-ridden for several years now. She lamented the neglect of Government at the local, state and federal levels. As someone who represented the nation, projected the name of her country as a Miss Nigeria 1958, no one cares whether she exists or not, even in her present condition. It only Chief James Ibori’s government that rendered her little financial assistance. Apart from that, no single assistance has ever come her way again either from government, NGOs or individual.

So, I am using this medium to appeal to the local, state and federal government as well as NGOs, multinational companies, and individuals to come to her aid. She added that before now, Helen had travelled to India and London all in a bid to seek medical treatment which was solely sponsored by the ailing Miss Nigeria herself. Gloria further told Sunday Mirror how she had to hire the services of someone who is now taking care of her as she is confined to a wheel chair. Her sister recalled that if not God’s intervention, Helen would have died last week when she fainted. But through the mercy of God almighty she was able to survive.

In her time, the pageant was not as lucrative and exalted as it is today. Government should always remember those who projected and promoted the country’s image positively, as the labour of our heroes past must not be in vain, according to our National Anthem, Helen’s sister said.