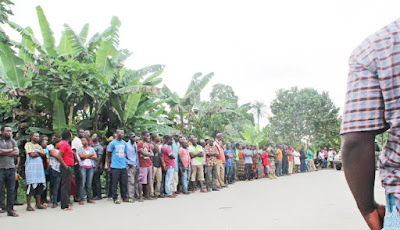 Asuquo Amba, the Bayelsa Police Commissioner, who confirmed the incident to NAN in Yenagoa, said that the pirates also made away with two rifles and a 200 horsepower outboard boat engine.

“At about 002hrs on Tuesday, some unknown gunmen suspected to be sea pirates came in two boats from different directions attacked our men that were at the marine base at Ogbia.

“We tried to be as defensive as possible. In the course of exchange of fire we lost two policemen who were shot in action and they were able to make away with two of our rifles.

“Also a 200 horsepower outboard engine belonging to the Ogbia Local Government Area was carted away.

“To show you the extent of exchange of fire at the scene we were able to recover a G3 magazine, which was used by them, with 17 live ammunition and 18 expended ammunition.

“The firing was not from one direction. It was through different directions. Prior to this time, we had secured our GMP gun which I think was one of the main thing they were looking for.

“Their target was that but we were able to secure it, so they could not steal it. We lost two police officers in action and the officer that led the team, an ASP, was equally injured and is recovering,”.Amba said

He regretted the resurgence of the activities of sea pirates which the command had curtailed during the festive period.

The CP said that the Command has enlisted the support of other agencies to help check the menace of piracy.

He said that available intelligence indicated that there had been a resurgence of activities of pirates in the state to sabotage the efforts of the government to secure the waterways.

“This is a recent development and it has given us a cause to sit up. We will re-strategise and secure our base and the water areas. I am sure they must have run away with their casualties.

“As at 2.00am, I, the Deputy and Assistant Commissioners in charge of Operations and others visited the vicinity and we have spread our dragnets.

“We have informed other security agencies and all efforts are being made to apprehend the suspects,” Amba said.

Residents of the area said that the hoodlums attacked the marine police formation in the wee hours of Tuesday and ransacked the place in search of arms and killed the two policemen on guard duty who confronted them.

Mr Lloyd Sese, Chairman of the Maritime Workers Union in Bayelsa, also confirmed the development and said that it had paralyzed the marine transport sector as boat operators were scared of the pirates.

“If they could be so daring to invade a Marine Police Base and disarm policemen on guard and kill two of them, then the waterways cannot be safe for marine transport operators hence we withdrew our boats,” Sese said.

Continue Reading
You may also like...
Related Topics:marine, militants, Policemen