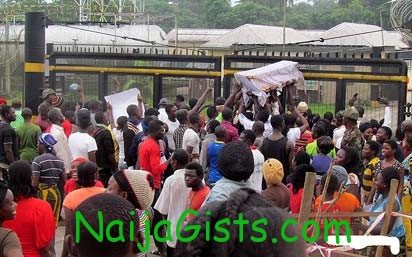 One protester said they wanted to remind Shell of its responsibilities to the local Nembe Island community, which needs electricity and other amenities.

Later in the afternoon, a local chief ordered the protest to end and the release of some workers on board three Shell boats blocked by the protesters. The oil giant denied to the BBC that anyone was kidnapped.

Nigeria is one of the world’s major oil producers, but the oil-producing Niger Delta region remains one of the country’s poorest and least developed regions.

For several years, bombings and kidnappings by militants in the Niger Delta – fighting for more rights and a share of oil wealth for local people – paralyzed the oil industry.

Nearly three years ago, most militants accepted a government amnesty, but the BBC’s Abdul Muhammed Isa in Port Harcourt says four soldiers and four policemen were killed by unidentified gunmen in the creeks around Nembe Island last month.

‘Improving lives’
Shell has four flow stations and two oil rigs in Nembe Island – one of the largest communities in the oil-producing zones of Bayelsa State where about one million people live, our reporter says.

Nengi James, a Nembe chief and chairman of the area’s oil and gas committee, told the BBC that the protest followed a meeting the day before between the community and Shell that ended in deadlock.

He said that, despite the area’s oil wealth, the community has little to show for it and the residents want Shell to provide electricity, water and schools.(vanguardngr)

Continue Reading
You may also like...
Related Topics:niger delta, Shell