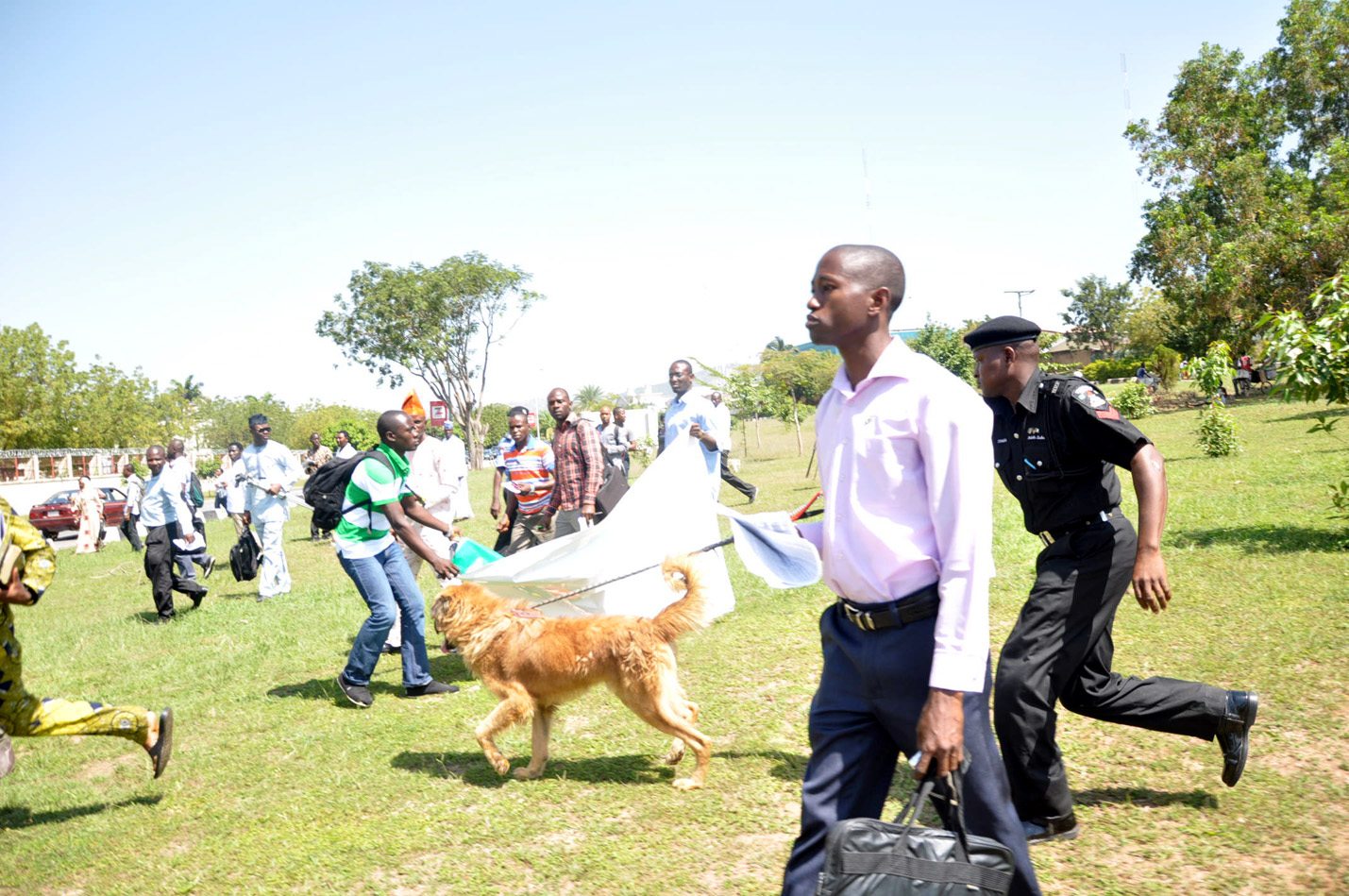 The Officials of the Nigeria Police Force, yesterday, invaded the venue of a peaceful gathering being held by young Nigerians against the Federal Government’s planned fuel subsidy removal. 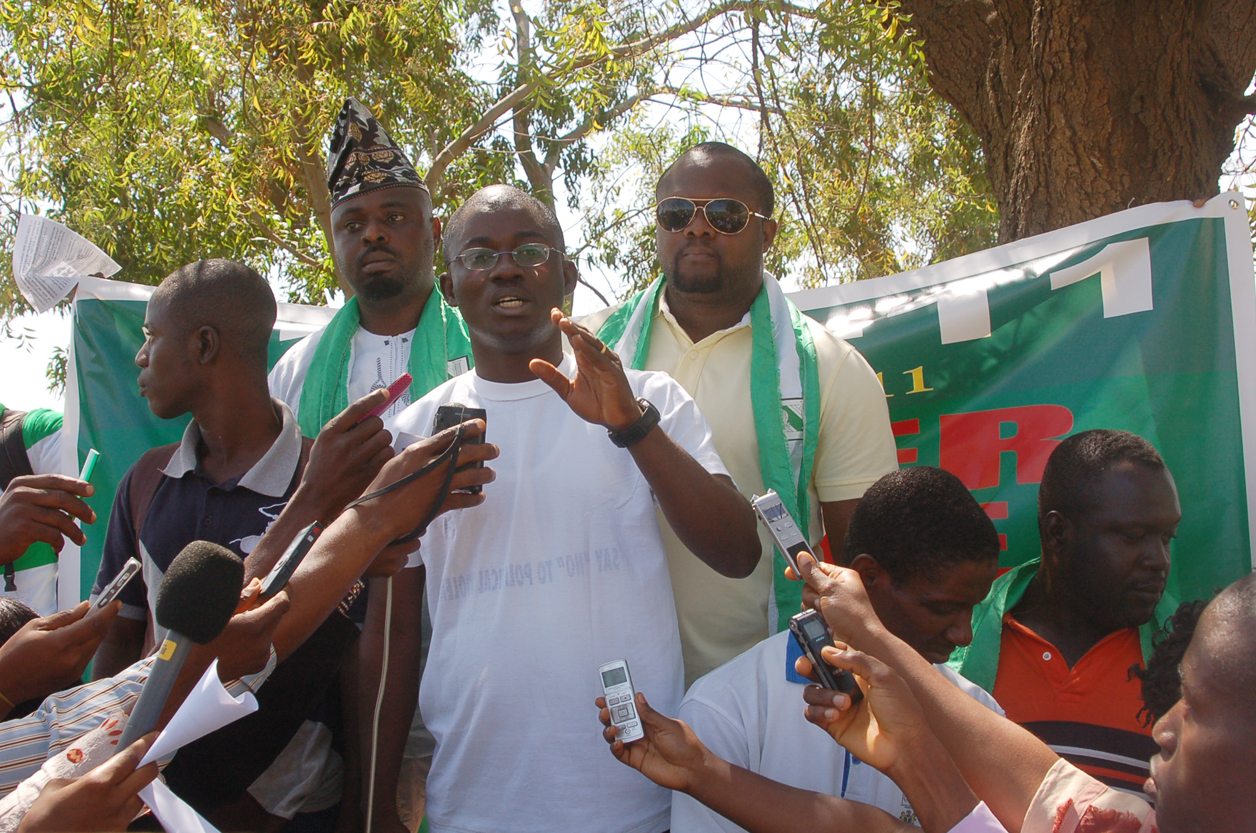 The event, which was tagged “Hunger Strike Day”, was organised by the National Youth Council (NYC) and had young Nigerians converge at the Unity Fountain beside Transcorp Hilon Hotel, Shehu Shagari Way, Abuja for a sit down.

At about 9a.m., the atmosphere was tense as officials of the Nigeria Police had beefed up security around the vicinity to prevent unforeseen circumstance. 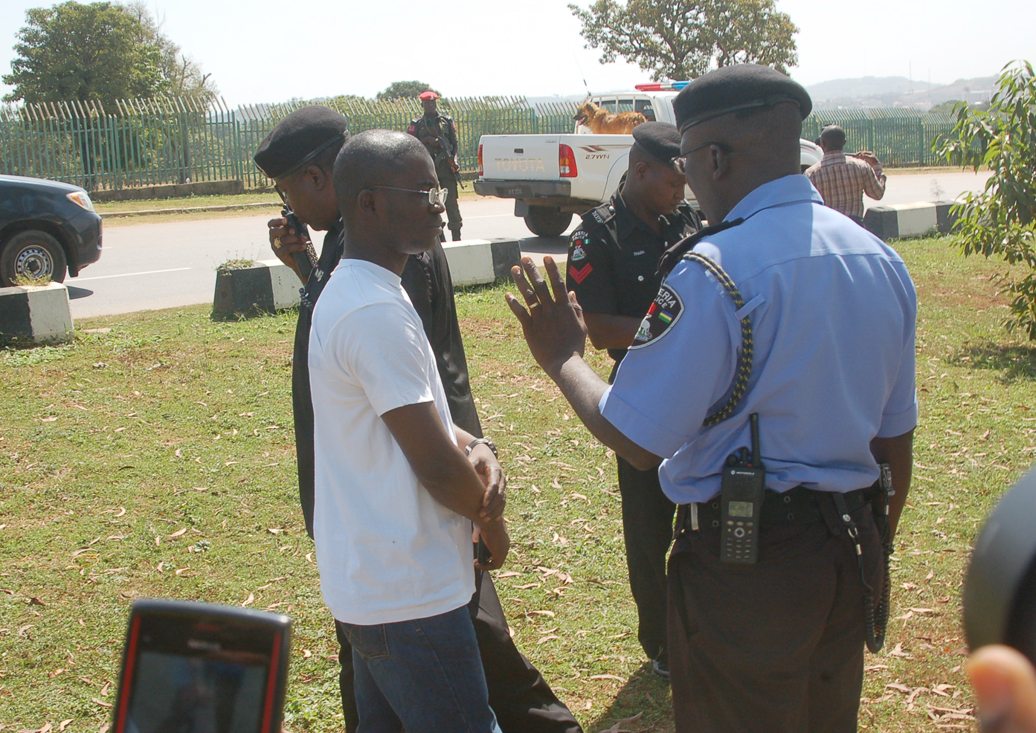 The two-lane road was also blocked at one end; from the Deeper Life Junction in Asokoro down to the point where Aguiyi Ironsi Street and Transcorp Hilton Hotel meet. Vehicles were disallowed from plying the lane and diverted to the second lane, causing traffic, even though it was glaring that the youth were gathered peacefully.

Some of the youth leaders, who spoke to Daily Times at the venue, said the hunger strike was necessary in order to stop the Federal Government from carrying out the proposed fuel subsidy removal.

A former Student Union leader from the University of Lagos told our correspondent that the youths were not in support of the removal.

“We are saying no to the removal of subsidy. If there will be any removal, enabling infrastructure should have been put in place and when we say enabling infrastructure, I mean they should have built refineries and stopped the importation of refined products of crude oil because there is no reason why Nigeria cannot refine its own products,” he said.

The President of the African Youth International Development Foundation, Dr. Tunji Ashaolu, said: “Government cannot just wake up one day and say what people are enjoying is no longer there. Let them do their part and allow people to see what they have on ground before the decision.”

The convener of the protest and the President of the National Youth Council (NYC), Wale Ajani, said a lot of unemployed Nigerian youths would have even more hardship unleashed upon them with the removal of the Subsidy.

Ajani expressed belief that the government would reconsider the removal of the subsidy. He spoke of supporting the Jonathan-led government, which he said he ‘worked’ to bring into power and had invested in, time and resource-wise and said “we believe that the government should listen to us”.

“If you are going to remove it, engage us, dialogue with us and let us have a debate. Let your economic team meets our representatives so that we could find a way forward.”

Ajani said the youths decided to engage in a peaceful sit-down because the era of violent protest had past.

“Things are changing in the world now. Look at what technology has brought to us. We need to change and that is what we are doing now. Changing our philosophy, changing our strategy, changing our system in terms of showing our displeasure, not by violence, not by going into the streets or abusing the government. We believe that with the little we have done now, the government should listen to us,” he said.

Although the turnout of youths at the Unity Fountain was low, the Founder of the Nigeria Youth Wing (NYW), Daniel Afilaka, said if they had wanted a crowd, they could have easily ‘rented’ one. But, he said, “the leadership of this generation is not in crowd. Many are led by a few; so the people you see here today are leaders of this new generation. We will lead, they will follow.”

The police and the hungry youths

On whether the group took permission from the police before embarking on the protest, the former UNILAG Student Union leader said: “Do we need to take permission to come and sit down and not eat? You can see that we are not doing a rally, this is not a rally, people are coming individually to sit down and say that they are engaging in hunger strike. I don’t know if you take permission not to eat.”

However, no sooner had the demonstrators started speaking to the press at about 11a.m. than the Federal Capital Territory Commissioner of Police led a group of police officers to the arena to disperse the youths.

Two of the officers, Ali Gwambal and Odukoya Sunday, warned the youths to discontinue the protest, following which other officers came out from their vehicle with police dogs to scare away the protesters.

“We have the information about the bomb threat passed to us so we don’t want to take any chances. We want you to leave here now or we enforce you,” Odukoya said.

NYW leader, Afilaka said they had anticipated the security situation because immediately the president of the NYC announced that there would be hunger strike, it was obvious that the police would want to ensure that there was crowd control.

He, however, condemned the way the police disrupted the gathering despite it being a peaceful protest.

Speaking on the dispersal, NYC leader, Ajani said it was so disheartening that men of the police who should have protected them were the ones chasing them away.

It will be recalled that in connection with the planned sit-down, Ajani had, on Wednesday, been invited by the State Security Service who detained him for about 11 hours.(daily times)