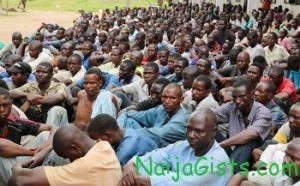 On Tuesday the 11th of October 2017, 300 Boko Haram suspects were remanded in custody as hearing got under way in the first mass trials of insurgents.

Journalists were banned from attending proceedings at four civilian courts set up in a military base in Kainji, Niger State on security grounds,.

But the Justice Ministry, in a statement, said three separate cases, each involving 100 defendants, were heard in three of the courts.

The spokesperson Salihu Othman Isah said the judges ordered all defendants to be remanded for 90 days, pending further investigation and preparation of charges.

The hearing will resume on January 9, the judges ruled.

One defendant, who is accused of attempting to bomb the central mosque in Bauchi, was ordered to be transferred to face trial.

The government said it will prosecute 651 others held at Giwa barracks in Maiduguri, Borno State.

Since the violence began eight years ago, only 13 people have been tried, with nine convicted, according to government figures.

The lead judge and state prosecutors promised to be “just and fair”.