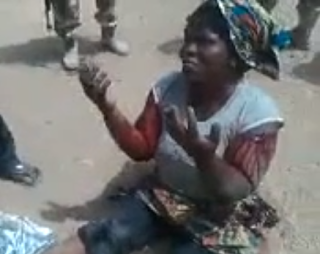 A Cassava seller was recently caught with guns that belong to Boko Haram sect in the North.

We learnt the woman was stopped on the way from a farm following leads from suspicious sources.

She was given a thorough search and to their surprise, 2 guns belonging to Boko Haram terrorists were found in her bag.

She was given the beating of her life by the Nigerian Army officers on spot.

The woman however said she knew nothing about the guns.