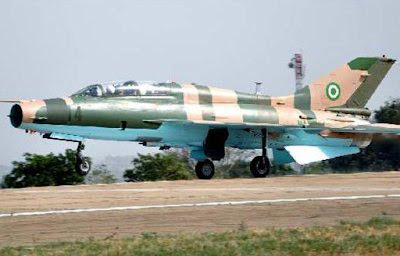 Details were unclear on the air strike and other aspects of the raid. Nigeria’s military has previously used air power since launching an offensive in May aiming to end Boko Haram’s four-year insurgency.

It occurred on the road as troops were travelling to the town of Biu and “had an encounter with fleeing Boko Haram terrorists,” it said.

“Ten terrorists lost their lives and some ammunition, including four  AK-47 rifles, five AK-47 magazines and 250 rounds of assorted ammunition, were recovered,” the statement said.

“Ten motorcycles belonging to the sect members were destroyed in the air and land raid.”

Boko Haram’s insurgency has left more than 3,600 people dead since 2009, including killings by the security forces, who have been accused of major abuses.

Konduga has been the scene of previous violence. On August 10 and 11, suspected Boko Haram members stormed a mosque in Konduga and shot dead 44 worshippers as well as 12 other people in a nearby village.

Much of the recent violence attributed to Boko Haram is said to have occurred in revenge over residents forming vigilante groups to help the military track down insurgents.

It also appears to have shifted from cities to more remote areas of the northeast.