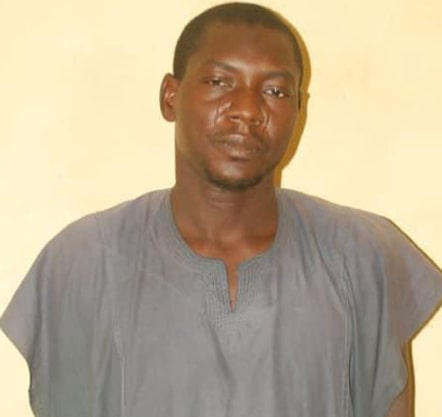 My Life Is Finished, I Have Killed My Only Brother – Fratricide Suspect

According to the Nation, Aliyu was cut with a machete by his older brother for refusing to agree to the sale of farm products to offset a N100,000 loan.

The suspect claimed he borrowed the sum of N100,000 from a friend of his and gave it to his late brother to renovate his house in the same area, adding that he promised the owner of the money that he would pay back after harvesting their farm produce.

The suspect said his younger brother had refused that they sell the farm produce to offset the loan.

Idris, out of anger inflicted machete cut on his younger brother leading to his death.

“I and my brother have been living and farming together since our parents gave birth to us. I borrowed N100,000 from a friend and gave it to him to fix his house, yet, he refused that we should pay back the money .I begged him to sell our farm produce to settle the man (lender)he didn’t listen to me.

“After the harvest, I told him the need to settle the person I borrowed the money from, he refused to listen to me and insisted that we were not going sell any farm produce to that effect. I lost my temper, pulled my machete and inflicted deep cut on his neck which resulted to his death.

“I killed my brother due to the pressure from the person I borrowed the money from and after my brother refused that we should sell our farm produce to pay him off.”

The suspect who is married with two wives and 13 children regretted killing his brother. He attributed the incident to the work of the devil.

”My life is finished, I have killed my only brother whose wife will give birth any moment from now; I am ruined forever,” Aliyu lamented.

The spokesman of the state police command, Muhammad Abubakar who confirmed the incident said operatives found the deceased lying in a pool of his blood in his residence when they received the report and went to arrest the suspect.

Fratricide is the act of killing one’s brother.