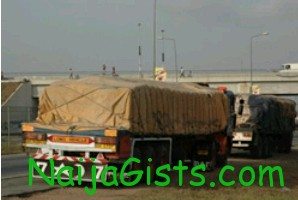 May 19, 2012 – Nigerian Truck Loaded With Guns Intercepted At Aflao, Ghana

A Nigerian registered articulated truck, with 65 pieces of pump action guns has been intercepted by the Customs officials at the Aflao border, Ghana.

The vehicle with registration number XV 163 FST was said to have arrived at the border on Thursday, 17 May at about 1900 hours, on its way to Accra, with no cargo on board.

Customs Officers at the last checkpoint who were said to be suspicious ordered the driver to park at the vehicle park for examination the following morning, Friday.

Their suspicion heightened when early Friday morning the driver and his “mate”, whose identity was not known, could not be traced for the inspection to proceed.

At about 1600 hours, however, the officers commenced the inspection without the driver and the “mate” and the weapons were found embedded in a false apartment on the floor of the vehicle.

Some bundles of US dollars and Naira were also found in the compartment.

CEPS officials, joined by Bureau of National Investigation (BNI) operatives and officers of the National Security were unwilling to divulge further information.