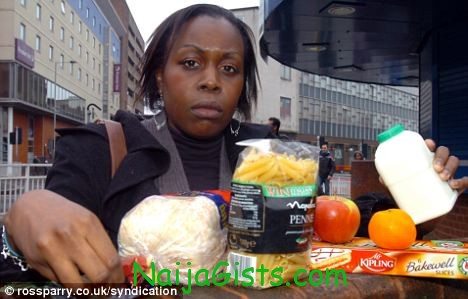 According to a report on Daily Mail UK, a 30 year old UK based Nigerian woman, Bunmi Shobowale, caught a stomach bug while on holiday and suddenly developed a host of food intolerances so severe that they twice robbed her of her sight and left her temporarily paralysed.

Bunmi said her food problems have affected nearly every part of her body at one time or another in more than 20 separate episodes. Her condition initially puzzled doctors, who even tried a form of chemotherapy in an attempt to treat her.

It was only when she was tucking into one her favourite treats, a pepperoni pizza, that she realised that food was a major part of the problem.
Doctors then discovered that she had suddenly developed an intolerance to a host of foods.

Meat and fish make Ms Sobowale sick, she cannot have alcoholic drinks and bread, pasta, cakes and biscuits cause her throat to swell and makes her skin feel as if it is burning.

Milk, cheese and chocolate make her nauseous and anything sugary – except fruit – sends her straight to sleep.
Doctors still do not know exactly what caused her illness, but think her collapse is connected to a stomach bug she picked up on holiday in Mexico in 2004.

They think her disease is a very rare condition called neuromyelitis, a problem in the central nervous system that affects the optic nerves and spinal cord.
But neurologists at Sheffield’s Royal Hallamshire Hospital are baffled by the link between her nervous system and her food intolerance.
Ms Sobowale said: ‘I had always been fit and healthy so the effect it had on my daily life was devastating. I couldn’t understand what was happening to me.
‘I lost my sight twice, for four months and again for two weeks and I was even given a form of chemotherapy to try and cure me.
‘My weight ballooned to 22 stones after having steroid treatment.
‘But the only thing that has worked since I became ill was changing my diet. It means that if I go somewhere or even just get on a train I have to make sure there is somewhere I can get the right food.’
Ms Sobowale, who lives with her partner, Mark, quit her job in the marketing department of a supermarket chain, took a course in nutrition and set up a website called foodsyoucan.com in 2009.

She said: ‘I was finally diagnosed in 2006 with gluten sensitivity and a range of food intolerances including wheat, gluten, soya, lactose and sugar.
‘I am reminded every day how food affects my illness. Some foods aggravate the pain and eating the wrong thing can cause a relapse. I still have to see neurologists for regular check ups.’
However, despite her ordeal she said: ‘I don’t regret a single thing that has happened to me and instead see all this as a blessing that has brought me to where I am today.‘