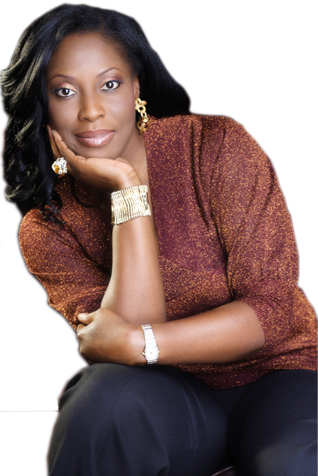 July 4, 2013 – Nigerian Entrepreneur Mosunmola (Mo) Abudu Is The First Woman To Own A TV Network In Africa

Here is the face of an intelligent entrepreneur who made history as the first woman to own a TV network in Africa.

On Sunday, the Nigerian business woman launched her own TV network, Ebony Life TV on DSTV.

Steve Forbes, the owner of Forbes magazine gave her an award.

She is a talk show host and the host of Moments with Mo.
She was born in the United Kingdom and her family relocated to Nigeria when she was just 7.

She was sent to her grandparents in Ondo state to learn more about African culture.

At age 11, she attended Fiwasaye Girls Grammar School. At 12, shortly after her father died, Abudu returned to the UK and attended Hammersmith County Secondary School before moving to the Ridgeway School in Kent where she lived with her guardian in Tunbridge Wells. From there, she went to West Kent College and MidKent College. She has a Masters Degree in HR Management from the University of Westminster, London.

Abudu is a member of the British Psychological Society, and is qualified in occupational and personality testing.

Abudu started off her career in the UK as a recruitment consultant in 1987, becoming a branch manager. She went on to work for the Starform Group, managing the Corporate Credit Management Exhibition from 1990 to 1992.

Abudu is the founder of The Inspire Africa Foundation, a human investment arm of Inspire Africa Ltd. It is registered as a non-profit organization focused on raising funds to implement society-transforming initiatives.

In January 2009, the Inspire Africa Foundation alongside Moments with Mo, the Lagos State Government and UNICEF held a telethon and a charity benefit concert with the theme “Rock with a Conscience”.

Abudu lives in Lagos, Nigeria, and enjoys international travel to London, Paris, New York City, Cape Town, and Johannesburg. She has a son and a daughter: “I love them so very much; I can‘t get over the fact that I am a mother.”