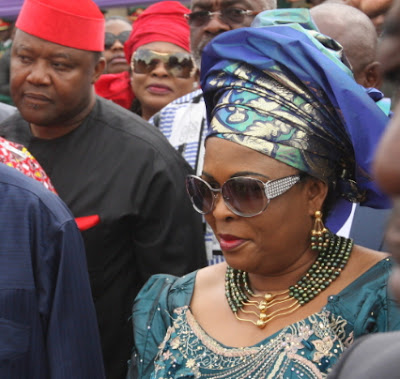 Many Nigerians have expressed outrage over the bid by former First Lady, Dame Patience Jonathan, to reclaim the sum of $34.1 million (N13.31 billion) lodged in some bank accounts linked to her. They demanded the prosecution of the ex-first lady and her husband, former President Goodluck Jonathan, over the matter.

The fund was trapped following the freezing of the accounts by the Economic and Financial Crimes Commission (EFCC) on the suspicion that they were proceeds of money laundering. The former first lady had dragged the EFCC and Skye Bank to court over the freezing of accounts allegedly belonging to the former presidential aide, Waripamo Dudafa.

According to her, the fund, which were lodged in business accounts opened in the name of Dudafa belonged to her. Former governor of Kaduna State, Alhaji Balarabe Musa, urged the EFCC to probe not just the former first lady, but also her husband, over the bank accounts.

Musa, who spoke with Daily Telegraph yesterday, said that while the former first lady must be held accountable for the huge fund linked to her, the investigation cannot be complete if it was not extended to her husband. “She is not the only one; even her husband should be probed.

The investigation will have no meaning if Jonathan is not probed. How did she come about that type of money? Of course, she couldn’t have got that kind of money without her husband creating the opportunities,” he said. Prof. Itse Sagay (SAN), the chairman, Presidential Advisory Committee on Corruption (PACC) told DailyTelegraph that Jonathan’s wife must explain how she acquired the money.

Patience Jonathan To EFCC: I’m The Owner Of The N13Billion In Frozen Skye Bank Accounts
In Pictures: Anambra Royal Fathers Condole With Senator Stella Oduah On Death Of Her First Child