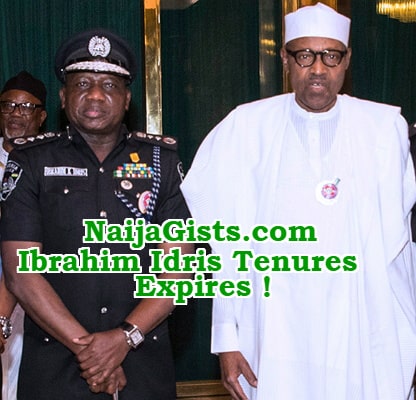 Details have emerged on President Muhammadu Buhari plan to likely extend the tenure of the Inspector General of Police (IGP), Ibrahim Idris, whose tenure in office expires today.

This is coming as palpable tension has gripped the ranks and file of the Nigeria Police Force who are waiting to see President Buhari’s final decision.

Idris who is the 19th indigenous Inspector General of Police, was appointed on March 21, 2016, the president.

He replaced Solomon Arase, who retired from service on June 21, 2016.

The Niger State-born IGP joined the police on January 3, 1984. The expiration of his tenure is said to be generating tension and suspicion among the ranks and file of the police most of who want the president to replace him.

Top police officers who spoke with our correspondent but didn’t want to be mentioned, raised fears that President Buhari, might extend the tenure of the IGP, to six months because of the elections coming up in March.

Police sources said although the IGP had reached the mandatory retirement age and number of years in service, they feared that the president might retain him just like he did with the Chief of Defence Staff (CDS), General Gabriel Olonisakin; Chief of Army Staff (COAS), Lt. Gen. Tukur Buratai; Chief of Naval Staff (CNS), Vice Admiral Ibok-Ette Ibas and the Chief of Air Staff (CAS), Air Marshall Sadiq Abubakar.

However, feelers from the force headquarters indicate that the reappointment of the IGP, might spell doom given the security situation in the country and would not go down well with some members of the force.

But another police source described those calling for the replacement of the IGP as enemies of progress.

The source also debunked the rumours that the IGP’s tenure in office expired tomorrow.

“Those saying the tenure of the IGP expires tomorrow are mischievous.

“You know his date of birth is January 15; even if he is going to retire, he is supposed to go on January 15, when he is 60 years.

“So, there is nothing like that; you know some people who are from inside and outside (the force) who are enemies, are trying to be mischievous.

“If truly it (his tenure) is expiring tomorrow, by now the government would have sent his letter to him asking him to pack and go. So, there is nothing like that,” the source said.