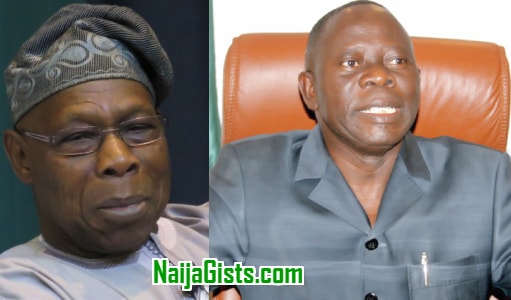 Obasanjo Should Be Jailed, He Arrested Many Of Us – Oshiomhole Talks Tough As Abiola Children Accuses Ex-President Of Betrayal

Ex- Edo State governor and top contender for the office of the National Chairman of the All Progressives Congress (APC), Comrade Adams Oshiomhole has said that former President Olusegun Obasanjo should arrested and sent to jail if found to have soiled his hands.

Oshiomhole spoke In a pre-June 12 event he organized in honour of late Chief Gani Fawehinmi SAN and acclaimed winner if the June 12 1993 Presidential Election, Bashorun MKO Abiola. He dismissed reports credited to the former President that President Buhari wanted to frame and arrest him, saying when he was in power, he also arrested and detained people, thinking that he would be president for ever.

At the event, Hafsat Abiola Castillo accused the former President of betraying their father when he declared that Abiola was not the messiah Nigeria was looking for and never mentioned him once in his eight years in office as President.

Oshiomhole also praised Chief Frank Kokori for standing up to dictatorship when it mattered most, saying even though he was not President if the NLC, he mobilized oil workers to support the ideals of democracy.

Oshiomhole said Chief Obasanjo should be investigated and sent to jail if found to have dipped his hands in the pie.

“Gani is not here today, but his spirit is here. Falana is here and today, I am standing. Even the president who was in charge then, he is now complaining that they want to harass him. He was harassing me and he got me arrested. He thought he himself would not be arrested?

“If I were the president, I would arrest him. We are all Nigerians. I remember one day I told him, I said ‘President Obasanjo, we made you president. You did not make me a Nigerian. You are our creation; I am not your creation. You must listen’.

“But he thought he would be in power forever and he tried to take us on the way to Zimbabwe. He was a reluctant Head of State, became president for two terms and he wanted to do a third term because a cockroach licking palm oil would never lick enough.

“I remember when I was accused by former president Obasanjo of behaving as if I was an alternate president; that I was running the NLC like a parallel government, that I wanted to overthrow his government. A small man like me, completely powerless.

“If I am dark like this, it is because of Obasanjo’s teargas. When I now hear these same people saying they are trying to arrest them, why shouldn’t they be arrested? He should be arrested if he has committed any offence. He arrested many of us.

“So, if we are celebrating Chief Gani Fawehinmi, we have compelling reasons to do so. In all of these, we didn’t pay any money to Gani or Falana. They defended us pro bono.

“The late Abiola would be smiling not just for the honour done him by the president, but that Frank Kokori who was very young then, deployed the instrumentality of oil workers to support the progressive mission of the civil society.

“It is not the position you occupy, but the role that you play that will define your place in history. This man was never an NLC president, but he is the only unionist invited to the investiture.

“So, we just consulted among ourselves, few of us who benefited from Gani’s leadership by using the instrument of the law to confront evil leaders. At the NLC, we were so efficient at causing troubles, but too poor to procure the services of legal titans like Gani and Falana, but who would always come and defend us pro bono. So, we felt that on the eve of his investiture, we should gather and celebrate him.

“On June 12, the late Abacha asked us to tell Abiola to do a national broadcast to renounce his mandate. Pascal Bafyau advised him to take the bail conditions because he got information that the regime was ready to keep him in jail indefinitely, but Abiola said he wouldn’t mind dying, that if you are already in the river, you can no longer complain of being wet.

“Abiola died, but Abacha also died and today, Abiola’s children can go anywhere and say I am Abiola. But I am not sure of other persons”.

Speaking at the emotion laden event, daughter of the late Chief Abiola, Hafsat Costello, said some people they considered as close friends of their father abandoned them when the June 12 controversy began, only to start calling the family’s phone lines when President Muhammadu Buhari proclaimed June 12 as Democracy Day and conferred a posthumous award of the Grand Commander of the Federal Republic GCFR on the late democrat.

“MKO had friends who seemed like friends, but they disappeared when the problems started and only started calling us when this award thing came last week. The phones have been ringing, but 25 years is enough to know your friends. I want to thank Mr Femi Falana, Prof. Pat Utomi and a few others for standing by us in the past 25 years.

“There is another story. MKO had this classmate who he used to assist even to pay his fees in school. But after June 12, he was the first person to say that MKO was not the Messiah. And he was president for eight years and couldn’t even mention MKO for once. He couldn’t honour him.

“We thank Buhari for this. He does things differently from the way the average Nigerian elite does things. If there is anything that means a lot to me, it is because MKO was true to the Nigerian people. If he had betrayed that mandate, he would have died a broken man and no amount of wealth would have made him happy.

“I have just being thinking about MKO. To have known him was to know greatness in the body of a Nigerian. MKO came from a very poor family. He used to be a singer, a drummer and boxer. People just gave him money not because this voice was good, but perhaps they just took pity on him, a destitute singer”.

Also speaking, Chief Gani Fawehinmi’s son, Mohammed said: “I am overwhelmed by this event organized in honour of my late father. It has made me to recognise that we should not always think of ourselves but of our neighbours. My father was a very unusual man”.