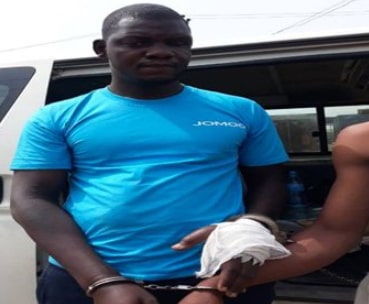 The suspect identified as Abdulmalik Umar, was said to have been responsible for the death of over 200 people.

39-year-old Umar was arrested by operatives of the Inspector General of Police (IG) Intelligence Response Team (IRT) around Mowe at a nurse’s house where he was receiving treatment for the bullet wounds he sustained during a recent gun battle with the police in Abuja.

It was gathered that the suspect, alleged to have masterminded the explosions at Nyanya and Kuje in Abuja in 2015, as well as several bank robberies in Ondo, Edo and other southern states, had fled Abuja three weeks ago when some of his gang members were apprehended.

A police source, who confirmed the arrest, disclosed that the nurse, who is said to be Umar’s sister, and her husband were also arrested for aiding and abetting criminality.

It was gathered that the head of the IRT, Abba Kyari, a Deputy Commissioner of Police (DCP), and his men had been trailing the one-eyed Umar since he entered Lagos three weeks ago.

They eventually busted his hideout around 2pm yesterday.

The Nation gathered that the suspect led the gang that killed seven policemen at Gwagwalada, Abuja.

Their AK47 rifles were carted away. He was also alleged to be behind the killings of policemen at Lugbe and armed robbery at Galadimawa Roundabout, among others.

The source described Umar as an overall “commander” of bank robberies in the southern part of the country as well as mastermind of killings in Okene, Kogi State.

“He was also the one who brought all the bombs they used during the Nyanya and Kuje attacks in 2015. We have arrested some of his members who are in court now. They were the ones who gave us his details and since then we have been looking for him.

“He has one eye and is responsible for over 200 killings. We arrested four of his gang members three weeks ago in Abuja and recovered four AK47 rifles which they took from the policemen they killed at Gwagwalada.

“He escaped at that operation with gun wounds and fled to Lagos. We have been on his trail since then. He went to his sister’s house in Mowe to hide. His sister was treating him of the bullet wounds. We have arrested her and her husband too because they are accomplices.

“He was the Grand Commander of the attack and rescue operations of the Prison in Niger State early this year where he lost one of his eyes during the operation while over 100 prisoners escaped.”

“It is true that he was arrested in Lagos. He fled Abuja with gunshot injury and was trailed to Lagos. We arrested some of his gang members three weeks ago and recovered weapons from them. They will be paraded soon.”