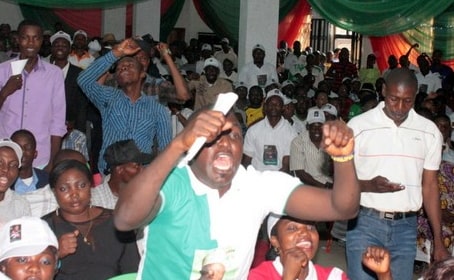 The group has formally joined the All Progressives Congress (APC) Committee of Youth Mobilisation and Sensitisation (CYMS) to ensure the re-election of President Muhammadu Buhari.

Malam Yunusa Mohammed, DYMN National Coordinator, on Wednesday in Abuja, said the organisation decided to join forces with the CYMS in the interest of Nigerians and youths especially.

He spoke when he led some members of his organisation on a courtesy visit to the Chairman of the CYMS Board of Trustee, Mr Festus Uchenna.

Mohammed said the DYMN which was originally registered as a support group under the PDP in 2014, resolved to join forces with the APC to work for the re-election of President Buhari because of the trust they had in him.

“We support and strategise for any candidate we trust and want to work for, we have mobilisers across the federation who serve as our foot soldiers.

“Elections are actually worn at the grassroots, and that is our base, from where we are going to start working from,“ he said.

Mohammed, however, noted that information reaching those at the grassroots, especially on the achievements of the APC Buhari-led administration had not really been robust, adding that his organisation was ready to change the narrative.

He stressed that his organisation would be ready and willing to work and carry out any responsibility that may be assigned to it, so long as it was aimed at ensuring Buhari`s re-election come Feb. 16.

Mr Obinna Nwaka, CYMS Director-General who received the group, said President Buhari had done so well, and had given youths of the country a sense of belonging.

He added that Buhari had to a large extent, ensured security in the country and had stabilised the economy even though he inherited a near empty treasury.

He said the Buhari administration had also recovered lots of funds from those who looted the country`s treasury while they held public office.

Nwanka said Nigerians, especially youths would forever, leave to remember what President Buhari was currently doing for the country.

He maintained that it was God`s plan for Buhari to be the country`s president at this point in time, adding that he deserve a second term to consolidate on his achievements so far.

“It is now our responsibility to give him the required support by re-electing him on Feb. 16, so that he will continue the good work God has assigned him to do at this period.

“The re-election of Buhari should be a collective effort irrespective of our political affiliations, tribe and standings in the society so that he can continue to consolidate on his achievements,“ he said.

He commended the national coordinator of the DYMN for seeing reasons why his group should support Buhari`s re-election.

According to Nwanka, Buhari is the only one that believe in the interest of youths and future of the country who does not believe in material things or acquisition of wealth.

He maintained that Buhari was the only president in the country`s history that had given youths political empowerment by signing the not too young to run bill into law to bring them into mainstream politics.

He said the Nigerian Youth Forum and the Justice Group, both of which are support groups, had earlier, joined the DYMN to work towards the re-election of President Buhari.